Peers, Kontinen win Shanghai, close in on No.1

Aussie John Peers and Finnish partner Henri Kontinen are closing in on the doubles team No.1 ranking after winning the ATP Shanghai Masters title. 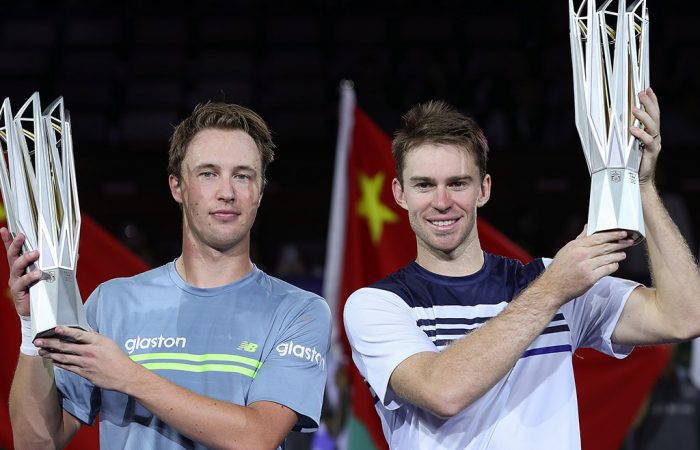 Another week, another title for John Peers and Henri Kontinen.

The Aussie-Finnish duo defeated Lukasz Kubot and Marcelo Melo 6-4 6-2 for the Shanghai Masters title, their second straight after capturing the China Open title in Beijing the week prior.

Now 9-1 in finals, Peers and Kontinen are now just 360 points behind Kubot and Melo – the top-ranked team – in the ATP Race to London.

“I felt the biggest difference is we’ve learnt how to sort of play better and more consistently in the bigger matches and the bigger tournaments,” said Peers, who with Kontinen is enjoying a seven-match winning streak.

“This year we’ve done that a lot better, and that’s been the biggest challenge for us was to consistently perform well in the big events. And for us, to be able to do it this year, has been really great so far.

“That’s the challenge for us still coming the rest of the year, to keep performing in the biggest events.”

Added Kontinen after their 69-minute victory: “Winning matches one by one and then obviously in the end winning the title, that’s great. To do it back to back, last week in Beijing and then here.

“Losing the final last year and now getting it, yeah, that’s the most pleasing part for me.”