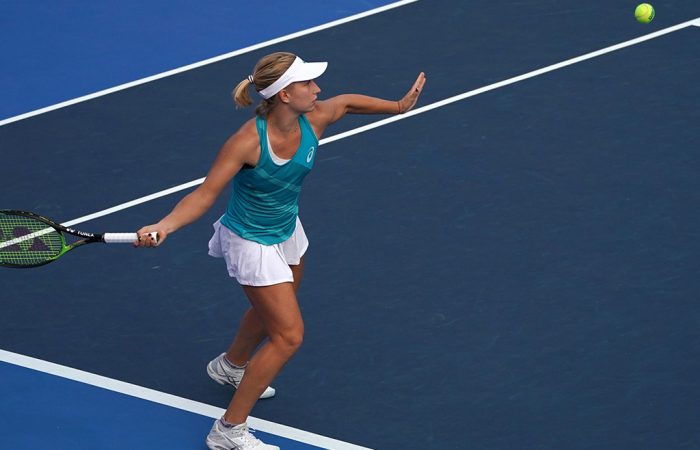 Gavrilova bolted out of the blocks but was eventually reeled in by the Queenslander, before completing a 6-1 3-6 6-4 win in two hours and 19 minutes.

Gavrilova led by a break in the final set before Cabrera broke back to level at 4-4; Cabrera led 40-15 in the next game and was one point from a 5-4 lead before Gavrilova stormed back.

It’s the third semifinal this season for Gavrilova, who won the title in Haven and reached the final in Strasbourg – where she fell to Sam Stosur.

“I have more experience than Liz and I think that helped today,” Gavrilova said.

“The semifinal will be a tough match. I hope I can serve better than today.”

Gavrilova in the last four will meet Jennifer Brady – who overcome fellow American Nicole Gibbs 7-5 6-4 – and will be bidding for her fourth career WTA final.

Stosur held two set points in the 10th game of the first set yet Wang survived, reeling off three games in a row to take the opener and then breaking in the fifth and seventh games of the second set.

Wang felt ill in the first set but, after calling for the trainer and speaking to her coach, recovered.

“I felt really, really sick, I couldn’t see the ball, but my coach pushed me,” she said.

She will face sixth seed Anastasia Pavlyuchenkova in the other semifinal.