In an all Aussie quarterfinal, Lizette Cabrera will battle Daria Gavrilova for a place in the last four at the WTA tournament in Hong Kong. 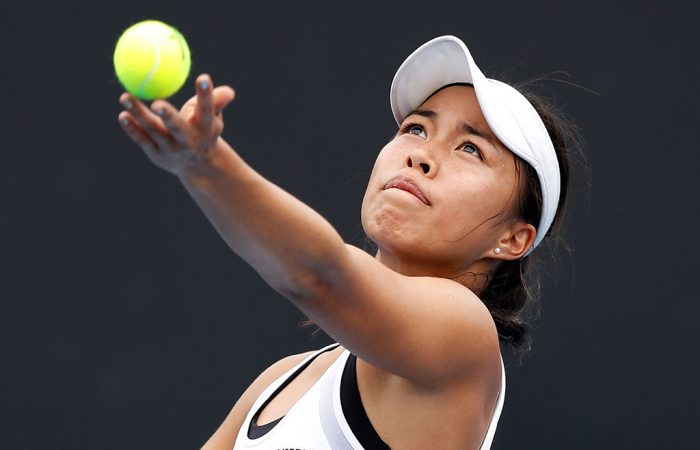 Lizette Cabrera has advanced past an injured Caroline Wozniacki to become the third Australian through to the quarterfinals of the WTA Prudential Hong Kong Tennis Open.

Cabrera was set to face No.3 seed Wozniacki on Thursday night, before the Dane pulled out of their second-round match citing an elbow injury.

The result means Cabrera progresses to her second WTA quarterfinal in a few weeks – after reaching the same stage in Guangzhou – and there she will meet fellow Australian Daria Gavrilova.

On the opposite side of the draw, Sam Stosur will face Wang Qiang for a place in the semifinals.

“I did everything I could possibly to get ready for today but unfortunately I hurt my elbow during practice and there was no way I could perform my best,” Wozniacki said after giving Cabrera a walkover into the last eight.

“Unfortunately I have to withdraw from the tournament.”

Wozniacki’s withdrawal mimicked that of Elina Svitolina’s; the top seed also pulled out of the International-level event, citing a right-leg injury.

With Venus Williams and Agnieszka Radwanska losing earlier in the tournament, all top four seeds have departed Hong Kong.

This leaves the door wide open for Gavrilova, who is just one of two seeds – along with Anastasia Pavlyuchenkova – remaining.

Stosur, who eliminated Radwanska, is the only major champion alive in the field.

Both Stosur and Gavrilova have won WTA titles this year and will in Hong Kong look to add a second to their 2017 CVs.

Stosur beat Gavrilova for the Strasbourg crown in May while Gavrilova hoisted the trophy in New Haven for her first WTA title.