Daria Gavrilova has joined fellow Aussies Sam Stosur and Lizette Cabrera in the second round of the WTA Hong Kong Open after a win on Tuesday over Miyu Kato. 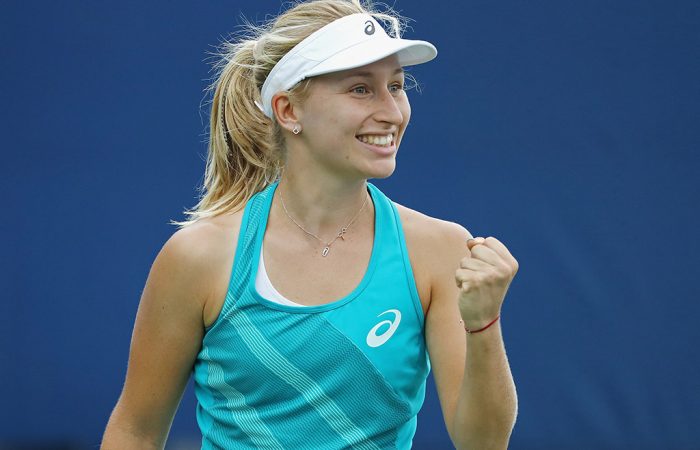 Daria Gavrilova had to fight hard in the second set but finally overcame Japan’s Miyu Kato in a tiebreaker to join Sam Stosur and Lizette Cabrera in the last 16 of the WTA Hong Kong event.

The world No.22 and seventh seed, who won 6-1 7-6(4), will next face American Shelby Rogers for a place in the quarterfinals.

Rogers defeated Gavrilova in a second-round epic a few weeks ago at the US Open, at three hours and 31 minutes the longest women’s match in the tournament’s history.

Kato made Gavrilova dig deep on Tuesday after the Australian breezed through the first set. Gavrilova was up 5-3 in the second before her No.126 ranked opponent rallied to level at 6-6.

Gavrilova showed some of the form from her two wins in Beijing’s China Open last week to finally take the match.

Radwanska had failed to defend her title at the China Open last week, falling to the unseeded Daria Kasatkina 4-6 7-5 6-2.

But the Pole was in far better form on Tuesday.

“Conditions are not easy, so I’m very happy to get through and win that match in two sets, ready for the next one.”

Stosur holds a 3-1 advantage in meetings, winning their last match in the Carlsbad quarterfinals in California in 2013.

Cabrera had won her first round match on Monday and will in the second round take on No.3 seed Caroline Wozniacki, who thrashed Eugenie Bouchard in round one.

On Tuesday in Hong Kong, another Aussie, qualifier Priscilla Hon, fell in a first-round thriller to fellow qualifier Jacqueline Cako.

The American overcame the Queenslander 6-3 4-6 7-6(5) in two hours and 21 minutes and will next face Anastasia Pavlyuchenkova.