Queenslanders Sam Stosur and Lizette Cabrera on Monday won through to the second round of the WTA tournament in Hong Kong. 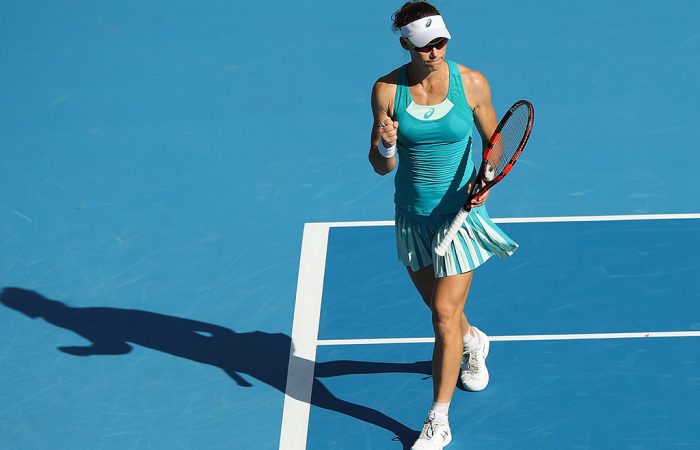 It was a perfect start for Australia at the Prudential Hong Kong Tennis Open on Monday, with Sam Stosur and Lizette Cabrera both winning their first-round matches.

Stosur’s comeback from injury gathered a little more momentum with the 33-year-old beating Lee Ya-Hsuan 6-3 4-6 6-1 in the opening match of the tournament.

World No.43 Stosur needed almost two hours to subdue the world No.303 Lee, serving 10 aces and seven double faults and closing out the match with a winner down the line.

“I played pretty well, especially in the third set when I took the lead and didn’t let go. I was able to finish the match quickly,” Stosur said.

“She was hitting well and had nothing to lose. I really stepped it up in the third. If I play like I did in that last set, I’ll be happy.

“I didn’t hit a ball for eight weeks, that’s the longest I can remember being off court. But now I’m not quite back to 100 per cent. I can train now and not think of the injury.

“It will still take some more work to get back to 100 per cent form.”

Stosur hasn’t made it past the second round of a tournament since her fourth-round appearance at the French Open, in which she lost to eventual champion Jelena Ostapenko.

She reached the second round at the China Open in Beijing last week, but again exited to Ostapenko.

Stosur will next play the winner out of No.4-seed Agnieszka Radwanska and qualifier Ling Zhang.

Cabrera, meanwhile, was a straight-sets winner over Japanese qualifier Shuko Aoyama in a touch over 90 minutes.

The 19-year-old posted a 7-5 6-3 win to set up a second-round meeting with either No.3 seed Caroline Wozniacki or Eugenie Bouchard.

Fellow Aussies Daria Gavrilova and Priscilla Hon will attempt to join Stosur and Cabrera in the second round when they take to the courts in Hong Kong on Tuesday.

Gavrilova takes on Japanese qualifier Miyu Kato while Hon – who came through the qualifying rounds to reach the main draw – will tackle American qualifier Jacqueline Cako.