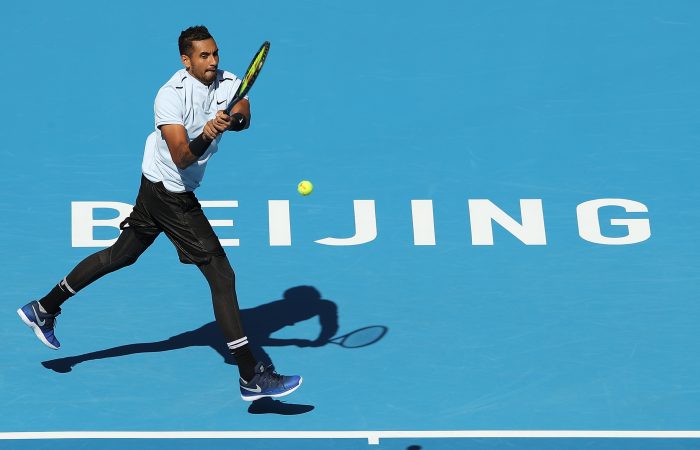 Nick Kyrgios is into the China Open semifinals.

The world No.19 was leading 6-0 3-0 when Belgian qualifier Steve Darcis retired with a neck injury.

“It wasn’t very enjoyable for me to be honest,” Kyrgios, who lost 12 points in the 30-minute quarterfinal, said.

“He obviously wasn’t 100 per cent. We had a pretty memorable match a couple of weeks ago in Belgium, so I was kind of expecting something like that today.”

Kyrgios admitted Australia’s Davis Cup loss to Belgium last month had been weighing on his mind leading into the match.

“What happened a few weeks ago in Davis Cup was pretty heartbreaking. I’ve been thinking about it every day since and I know everyone else in our team has too,” the 22-year-old said.

In his fifth ATP semifinal of the season, Kyrgios meets either world No.4 German Alexander Zverev or Russian teen Andrey Rublev.

He holds a 2-1 win-loss record against Zverev, but lost their most recent meeting in August, and has not played Rublev since juniors.

“It’s going to be tough either way, both guys are confident,” Kyrgios said.

“Rublev beat a couple of good players here and had a good run at the US Open. Alex has had a great year and is one of the best players in the world right now, but I’m looking forward to it.”