Daria Gavrilova's improved week-to-week consistency is, according to Nicole Pratt, a sign of her enhanced belief that she belongs at the top of the game. 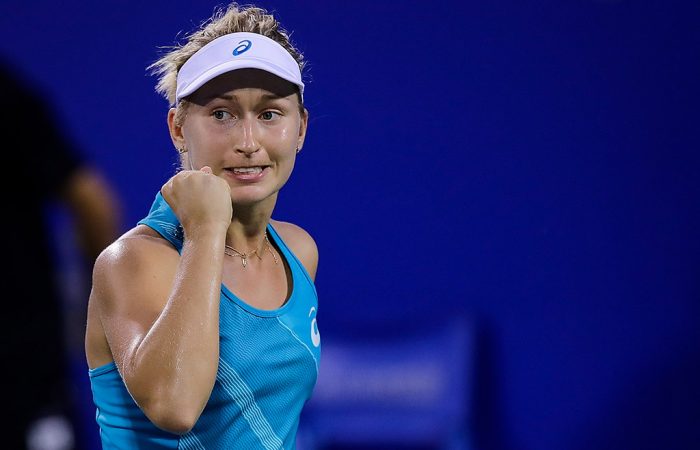 Daria Gavrilova’s progression to the last 16 at the China Open is yet another impressive run in a career-best season on tour.

The Australian’s wins over Anett Kontaveit and an injury-hampered CoCo Vandeweghe have set up a third-round meeting with Barbora Strycova, who eliminated top seed Garbine Muguruza in her first match.

A win would see Gavrilova reach her sixth WTA quarterfinal of 2017 – including her fourth at Premier level.

Nicole Pratt, who before her role as Australia’s head of professional women’s tennis served as Gavrilova’s full-time coach, believes the 23-year-old is blossoming into a consistently dangerous performer at the top level.

“I think she’s always had the ability. I think she always struggled with the consistency week in week out on tour,” Pratt said of the former world No.1 junior.

“We saw some amazing results, even if we backtrack a couple of years (to 2015); beating Maria Sharapova in Miami was her breakout win. And then qualifying and making semifinals of Rome.

“The level was there, I just think she’s got a different maturity about how she’s going about things. I think she feels more of a sense of belonging to the upper echelon of the tour now. Each and every experience that she has, whether it’s been a positive or a negative one, I think it’s really helped her prepare for the situations ahead.

“Even Strasbourg, losing in the final there (to Sam Stosur), that really hurt, and that came up in conversation prior to the New Haven final – she didn’t want to lose another final. So all those losses work towards the wins later on.”

Indeed, in August, Gavrilova went on to her first career title with a thrilling three-set win over Dominika Cibulkova in the Connecticut Open final in New Haven.

As a reward, she cracked the top 20, and currently sits just below that high mark at No.22.

Her improved standing in the game means she’s in the running to qualify for the WTA Elite Trophy in Zhuhai, open to players ranked No.9 to No.19, plus one wildcard to round out the 12-player field.

A strong week at the China Open will significantly bolster her chances of taking part in the season-ending event.

Pratt said increased stability was another factor in the Victorian’s rise up the rankings.

“I think the fact she’s been working with (coach) Biljana (Veselinovic has helped), and that’s been consistent throughout the year,” Pratt said.

“And she’s also has a great physical team around her. Dasha thrives in a team environment and she’s been able to have that team around her on a consistent basis this year.”

Gavrilova takes on Strycova – her doubles partner in Wuhan last week – in the second match of Thursday’s schedule on Moon Court, from approximately 5pm AEDT.