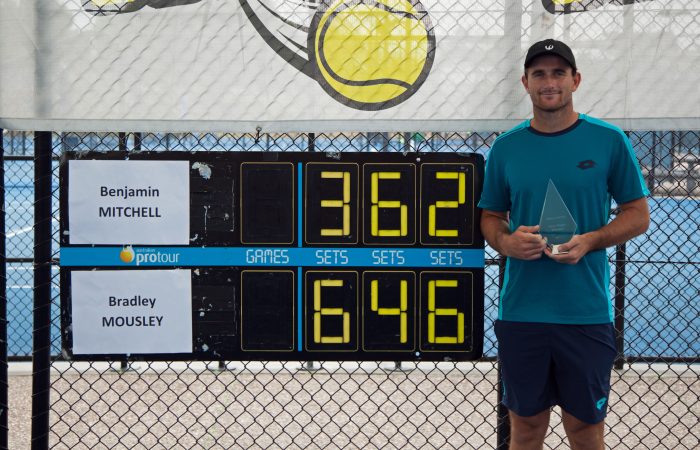 “It’s great to win one in Australia and be playing well,” Mousley, 21, said. “I played Ben last week and had a very tight match so I knew it was going to be difficult.”

Mousley made the early running in the Brisbane QTC Tennis International final, taking the first set and going up an early break in the second, before the more experienced Mitchell began to press hard.

“I just tried to stick to my own game, play big and keep attacking,” Mousley, the No.6 seed, said. “I got on top of him a little bit early but he came back really well.

“I tried to keep myself nice and calm and it all worked out for me in the end.”

Mousley had previously made two ITF Futures finals this year, but Sunday’s win marked his title for the year and second in total, after success in Greece in 2016.

Despite losing to Mousley for the second time in a fortnight, Mitchell – a Gold Coast native – enjoyed a solid campaign in Brisbane. In just his second tournament back after a significant period away from the game, Mitchell defeated top seed Omar Jasika and fellow Queenslander Maverick Banes – the No.4 seed and a winner in Alice Springs last week – on his way to the final, both in straight sets.

“It’s just great to see him out there again,” Mousley said of his 24-year-old opponent, a former world No.204.