Nick Kyrgios held a match point but ultimately went down to Roger Federer in Prague, a result that saw Team Europe lift the inaugural Laver Cup. 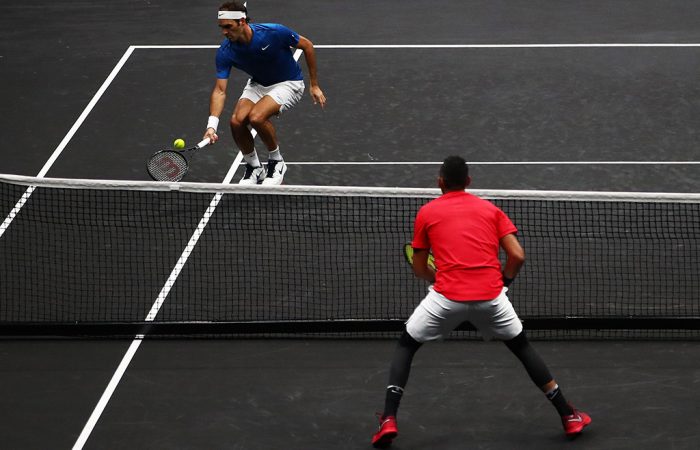 Nick Kyrgios had one match point but it was Roger Federer who ultimately prevailed 4-6 7-6(6) [11-9] to clinch the inaugural Laver Cup for Europe.

In an intense match in Prague, Kyrgios often had Federer on the ropes but just couldn’t get over the line as the Swiss star secured the victory, leaving the 22-year-old Canberran in tears.

If Kyrgios had been able to win, it would have tied the scores between the world and European teams and forced a final doubles match.

“It was tough”, Kyrgios said of the loss. “When I’m playing for myself, sometimes I don’t put the greatest effort in. When I play with these guys I’m playing for something as a team.

“I know that every single one of these guys up here has put effort into this week, whether that’s practice or supporting other guys.

Such an amazing experience at Laver Cup. Came up just short but gave it my all against Roger Federer. Team World… https://t.co/jj44zrXoif

“We all bought in as a team. That’s why it hurt. I gave everything I had. I came up short, and I knew that we were going to be favourites going to the doubles. That was in the back of my mind.”

Kyrgios got the only break of serve in the first set but soon found himself a break down at the beginning of the second.

But after a medical time out, the Australian broke back and took it to a tiebreak.

The match then went to a champions tiebreak which Kyrgios led 6-2 at one point.

But Federer battled back and Team Europe got the point needed for victory when Kyrgios sent a forehand into the net.

“It has been such an amazing and fun week and I’m so pleased the event has worked as it has,” Federer said post-match.

The world team had clawed their way back into the tournament on Sunday with a win in the doubles match, and even more so when John Isner beat Rafael Nadal 7-5 7-6(1).