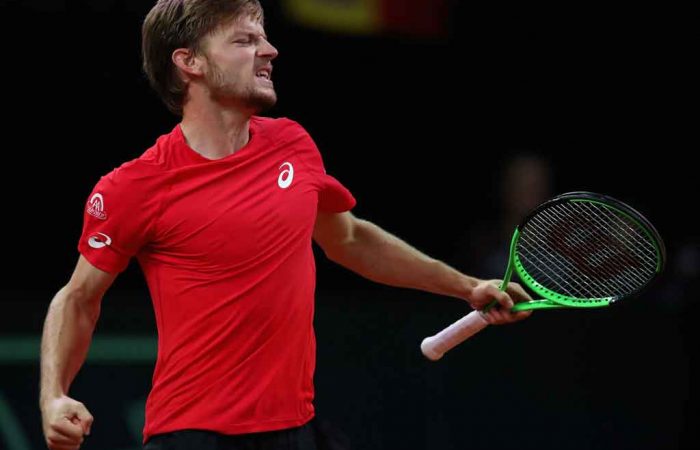 Davis Cup warrior David Goffin has once again rescued Belgium, levelling the semifinal against Australia with a 6-7(4) 6-4 6-4 6-4 win over Nick Kyrgios.

The world No.12 had never beaten Kyrgios in their three previous encounters but he secured his 15th win in 16 singles rubbers for his country with a superb performance, after losing the first set

Kyrgios dominated the opening set on serve, hurling down 10 aces, and enjoyed plenty of success against Goffin’s.

However, the Belgian baseliner held firm to save seven break points in the first three games to keep the scores level.

Kyrgios took the ensuing tiebreak to wrap up the set with a 204kph missile on his second serve to put Australia on the brink a first Davis Cup final appearance in 14 years.

But Goffin, who has only tasted defeat to Andy Murray in a singles rubber since 2014, responded magnificently to that setback, nailing his first break point of the match in the opening game of the second set.

Confidence restored, the 180 cm baseliner started to find his range with some crunching forehand returns that rattled Kyrgios and levelled the match at 1-1 in just 34 minutes.

The third set followed a similar trend with Goffin, feeding off the noisy home crowd, continuing to play his shots, the highlight a blistering forehand winner down the line on his way to his second break of the match.

Try as he may, Kyrgios started to struggle to counter Goffin’s serve and the home favourite wrapped up the third set with an ace down the middle of the court.

Both players held serve early in the fourth set before Goffin made the breakthrough at 3-3.

A helpless Kyrgios shrugged to the Australia bench and mouthed “I am not doing anything wrong,” after another brilliant winner from Goffin.

The Canberran hit straight back to level the scores at 4-4 but immediately handed back the initiative after double-faulting on break point to allow Goffin to serve out the match.

Jordan Thompson now aims to beat Steve Darcis to hand Australia a place in the final for the first time since 2003, and that final will be against France.