David Goffin was made to work hard for Davis Cup victory as John Millman pushed him to four gruelling sets in Belgium. 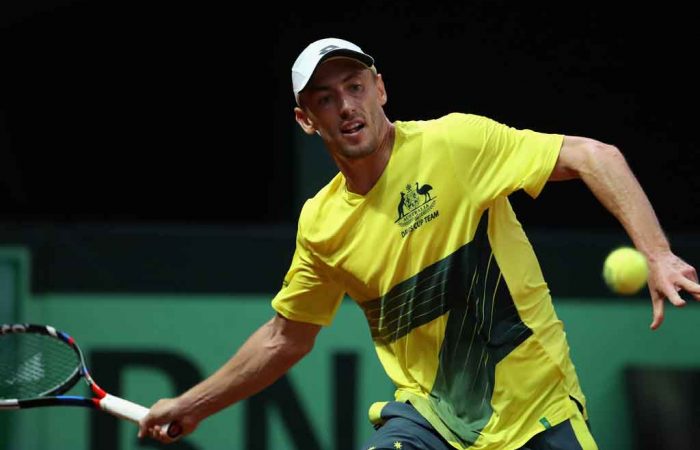 The world No.12 has now won 14 of his last 15 Davis Cup singles matches, but he was made to work hard for his victory by the 185th-ranked Queenslander, who was only called into the team by captain Lleyton Hewitt on Thursday.

Millman grabbed the opening set in a tiebreak after battling back from a break down to stun the noisy home crowd.

He was well placed to win the second but unable to convert four break points at 4-4 and Goffin seized the initiative on Millman’s serve to level the match at a set apiece.

Goffin broke again midway through the third set on his way to opening up a two sets to one lead and looked to be edging towards victory with an early break in the fourth.

However, the 28-year-old Millman demonstrated tremendous fighting spirit to break back immediately only to surrender his serve in the next game, before once again levelling the scores at 3-3.

Millman had another break point at 4-3 but was unable to convert. Goffin broke Millman for a 6-5 lead and ultimately served out the match.

“I tried to use the energy form the bench and use the fact that I’m playing for my country to keep me going,” said Millman, who admitted that he was “shattered” by the loss.

“I’ve wanted to play for my country for as long as I can remember.

Goffin paid tribute to Millman, explaining he fully expected a fierce battle despite facing a player ranked 172 places below him.

“Physically there were some really tough points, I was not surprised because I know how well he can play,” Goffin said. “It was tough and I am happy to have won.”