The famous fighting spirit that propelled Lleyton Hewitt to Davis Cup heights is now driving Australia's next generation in the team event. 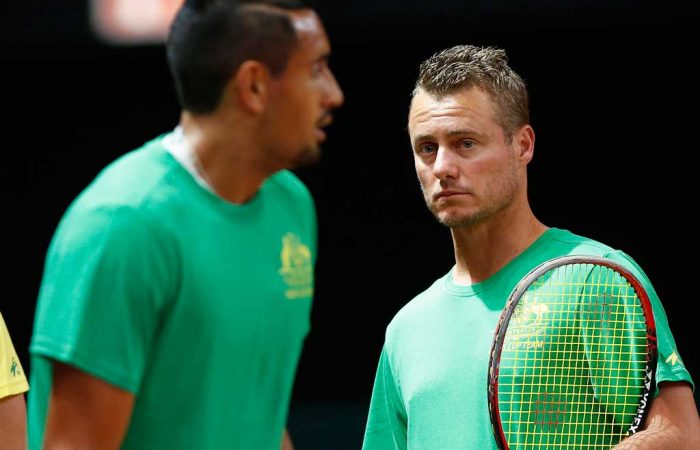 For Lleyton Hewitt, nothing meant more as a player than Davis Cup.

His unrivalled passion became the critical ingredient to many famous five-set victories – most memorably over Roger Federer and Juan Carlos Ferrero in 2003, as Australia defeated Switzerland in the semifinal and Spain in the final on the way to a 28th victory in the team event.

Now captain of Australia’s Davis Cup team, Hewitt is delighted to see the same fighting spirit driving generation next. With wins over Czech Republic in the first round and USA in the quarterfinals, team members have the chance to take that spirit to another level with a semifinal win over Belgium this weekend.

“It would mean a lot. Especially with these boys and all the support that we’ve had,” says Hewitt when asked what it would mean for the team comprising Nick Kyrgios, Jordan Thompson, Thanasi Kokkinakis and John Peers to secure an appearance in November’s final.

“The last two years since I’ve been in charge, these guys haven’t put a foot wrong. We’ve had some big challenges but we’ve overcome them. We know we’ve got a great opportunity this week.”

It helps that the spirit among the team is so strong. “The team camaraderie is as good as I’ve ever been involved in in Australian tennis and Davis Cup teams,” notes Hewitt. “And that’s something that I’m really proud to work on and bring back and I think that’s why we’re having the success that we’re having at the moment. We still know there’s a long way to go (but) we’re all here for the right reasons.”

Among those reasons is the example that the former No.1 set throughout his playing career. “I guess they saw me as a player, They saw me train, they saw how passionate I was about this competition and about playing for Australia so in some ways that probably rubs off on them,” Hewitt says.

As Australia’s most prolific Davis Cup representative – over a 17-year career, he contested 42 ties, amassing a 58-21 win-loss record in singles and doubles – Hewitt’s team experiences provide many conversation points.

“Some players want to know more. A guy like Thommo (Jordan Thompson), I think he’s watched all my highlights from my whole career, so there are certain guys. It’s amazing. They all love tennis though and they have all seen so many matches and obviously mine in Davis Cup.”

That can only be a positive thing. Thompson’s debut in Davis Cup this season delivered immediate rewards, the 23-year-old defeating the higher-ranked Jiri Vesely in Australia’s first-round win over the Czech Republic and upsetting Jack Sock to claim a critical point in the quarterfinal victory over USA.

For Hewitt, it’s no surprise to see Thompson now replicating such performances in his individual career. At Queen’s, the Sydneysider stunned world No.1 Andy Murray and at the US Open, Thompson had another stunning victory over the seeded Sock.

“He’s gone from strength to strength,” says Hewitt. “He still has areas of his game to improve on but I think Davis Cup has been a springboard … he’s got a lot more belief and confidence from those wins. He’s a good guy to have around the group.”

Another boost is the return of Thanasi Kokkinakis, who was a member of the Australian team that contested the 2015 semifinal against Great Britain. “He’s had a rough couple of years with injuries. So for him I think it’s just a big step to be back around the boys again and feel a part of it,” says the Australian captain. ​

“So no matter what happens this weekend, I think it’s just another stepping stone in Thanasi becoming the player that we know he’s going to be.”

Kokkinakis’ successful comeback, in which he’s claimed high profile wins over Milos Raonic and Tomas Berdych, highlights that the team spirit in Davis Cup can expand to other events.

“We’ve tried to make it not just the Davis Cup weeks, we’ve tried to make it all year round,” Hewitt explains of the team approach. “We want to see Davis Cup as a springboard to help Australian tennis every week. So I’ve just been really proud of the boys. They go out and support each other at the other tournaments. They hit and train together, they’re always in contact every week.”

As Australian players prepare to meet Belgium on an indoor clay court at Palais 12 in Brussels, the team is even more aligned – and Hewitt is happy to note the progress that’s already been made.

“We’re excited. Preparations have gone really well. Adjusting to a new surface is always tough but the boys all came over here extremely early and they were all eager to get on the clay court and adjust to it as soon as possible,” he says.

Hewitt expects the challenge from Belgium will be intense. “(David) Goffin is a class player. He’s a top 10 player. He plays well on all surfaces, especially on clay surfaces. I think he handles pressure and expectation pretty well,” he says. “(Steve) Darcis has obviously played some good Davis Cup matches as well so he’s someone to be wary of.”

“I think (the Belgian team) is a pretty close knit group, so I think they respect the competition. It means a lot to them and the country. In Davis Cup you never take anything for granted. That’s one of the great things about this competition – rankings get thrown out the window.”

In Hewitt’s own experience – both as a player and a captain – Davis Cup can provide a nation with a unique boost. The quarterfinal win over USA was a case in point.

“That was a massive tie. For me, that was probably the biggest tie we’ve won since the final in 2003. It’s something I was pretty proud of with these boys going out there and performing,” recalls Hewitt.

“It just helps tennis as a sport in Australia as well because otherwise being so far away and the game being played in other continents really we only have the end of December and January, which is our time of the year to shine in tennis in Australia. So for us to go out and play big matches in Davis Cup, it helps our sport.”

And even bigger opportunities to build on that success could be ahead. Should Australia win this weekend, a home final against France or Serbia awaits.

Australia last featured in a final in 2003, when Hewitt helped his nation claim a hard fought win. Be it as player or as captain, Hewitt’s fighting influence is strong.