As Australian players target a team high by winning through to the Davis Cup final, there are also potential individual gains. 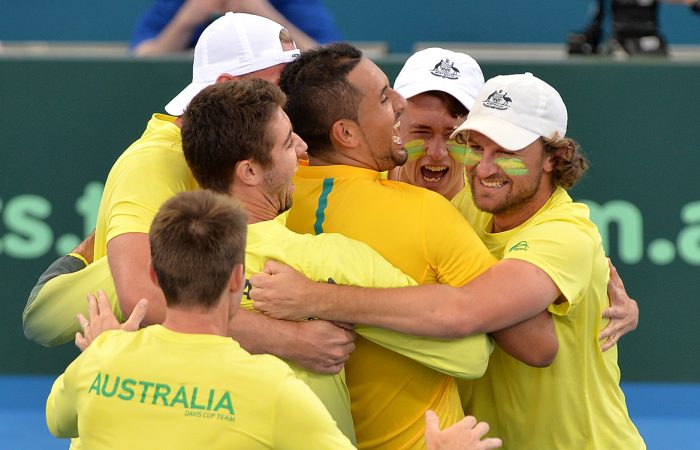 Should Australia advance to the Davis Cup final with a win over Belgium, team members can also use that experience as a positive springboard to brighter individual careers.

That’s the opinion of Todd Woodbridge, himself a Davis Cup stalwart in a 14-year career that included key roles in Australia’s winning teams in 1999 and 2003.

“It’s such an important tie for Australian tennis. It has a real opportunity to be a springboard to some really big things over the coming years,” Woodbridge says of the semifinal to be contested in Brussels from Friday.

Like most observers, Woodbridge looks first to the powerful impact of Nick Kyrgios.

The highest-ranked Australian man, at world No.20, the 22-year-old from Canberra has also played a starring role in helping his nation progress to a second World Group semifinal in the past three years.

Kyrgios is flawless in Davis Cup play this season, with a win over Jan Satral contributing to Australia’s 4-1 first round victory against the Czech Republic in Melbourne, before victories against John Isner and Sam Querrey provided a critical element to Australia’s quarterfinal sweep over the USA in Brisbane.

Woodbridge believes that even during the recent US Open, Kyrgios had already turned his attention to the high-stakes semifinal this weekend.

“HIs attitude and focus has really been towards this Davis Cup, which is quite intriguing in itself,” says Woodbridge, noting the individual progress that has accompanied Kyrgios’ role in the Australian team.

“What it seems to be doing is armouring him with a few tools … to be able to handle a little bit of pressure. He understands that there’s a group behind him that are supporting him in a bit more of a team environment and he has really taken to that.”

Kyrgios candidly credits Davis Cup for a turnaround in his love for tennis and Woodbridge believes that the young Australian will experience further rewards yet.

“When I look back at Davis Cup it’s actually defined a lot of players’ careers. It’s either made them or it’s broken them. And what this is turning out to be is one of those moments for Nick.”

Kyrgios’ renowned ability to showcase his best on a big stage has another element at the team event, where far different outcomes can arise.

“Davis Cup can be the most pressure you ever play under because it’s a microscope of intensity,” Woodbridge explains. “When you play as an individual you lose for yourself. But when you play and lose in this environment there’s a lot more that you feel. I think that’s been a real maturing element for Nick.”

A Davis Cup debut earlier this year has also provided a coming of age for Jordan Thompson. Starting with an upset win over higher-ranked Czech Jiri Vesely in his first-ever Davis Cup rubber, the 23-year-old also defeated Satral at Kooyong and was an upset winner over Jack Sock in Australia’s quarterfinal win in Brisbane.

Woodbridge points to that experience as a factor in Thompson also upsetting the seeded American with a 6-2 2-6 6-3 4-6 2-6 win in the US Open’s first round.

“He’s also gone and beaten (Andy) Murray at Queen’s,” Woodbridge adds. “Because the way the Davis Cup has gone this year, it has individually enhanced all of these young guys’ performances.”

Thanasi Kokkinakis, reinstated into the Australian team after his return the tour after a long absence with injuries, is poised for similar success.

In little more than three months, the 21-year-old South Australian has improved his ranking from world No.993 mid-June to his current No.213, helped by win over Milos Raonic at Queen’s and an upset of Tomas Berdych in Los Cabos that also delivered a first ATP final.

“I’ve been impressed by his quick bounce back after so long out of the game. Some of the scalps that he’s managed to quickly get. (He’s played) good matches against top players that sometimes could take a bit longer,” says Woodbridge.

“He’s had to mature incredibly in a very different way. He now has a view of tennis that this is a real opportunity and I’m not going to let this get away from me. It’s not an entitlement for him now. He knows that he probably has one shot at it and is going to make the most of it.”

Kokkinakis has already demonstrated his spirit for Davis Cup with a five-set upset of Lukas Rosol in the 2015 first round and should he contest any singles rubbers against Belgium this weekend, he’ll require more of that same fight.

Spearheaded by world No.14 David Goffin, the Belgian team also includes world No.33 Steve Darcis, No.96 Ruben Bemmelmans and No.198 Joris De Loore.

Belgium, who achieved its last Davis Cup milestone occurred in 2015 as the runner-up to Great Britain, has chosen an indoor clay court for the semifinal.

“They’re an underrated nation. They’re quiet, they’re conservative, they’re very bullish on court and have the competitive nature to hang In,” says Woodbridge of the challenge that the visiting Australians will face.

At the same time, the experienced Davis Cupper sees a bright future ahead.

“I don’t think Australia will get a better opportunity than a semifinal to go through,” says Woodbridge. “They’ve got to take their chance.”