Jordan Thompson has enjoyed a huge win at the US Open on Monday, holding on to defeat 13th seed Jack Sock in five sets. Thanasi Kokkinakis, Bernard Tomic and JP Smith went down. 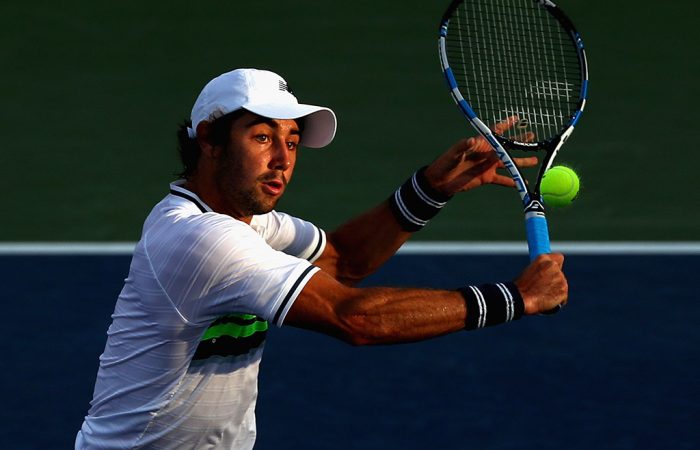 Jordan Thompson has continued his stellar season with a spirited five-set US Open win over one of America’s great hopes.

The 23-year-old sunk to the court in jubilation after atoning for last year’s gut-wrenching first-round loss from two sets up against Steve Darcis.

“It feels incredible. I let all my emotions out at the end. Last year I had a heartbreaker over here and nearly had the same thing happen again,” Thompson said.

“So to get over the line, it meant the world to me.”

The plucky baseliner is making a habit of getting over the line on the big stages in 2017.

He also beat Sock in a pivotal rubber in Australia’s Davis Cup quarter-final triumph over the USA in April before toppling then-world No.1 and four-times champion Andy Murray at the traditional Wimbledon warm-up event at Queen’s.

The American felt he should have won in four sets and rued losing the epic 26-point second-set tiebreaker.

“Maybe could have not been so topsy-turvy if I hold once in the second,” Sock said.

“I’m through in four the way it was going. He’s a tough player. Makes a lot of balls. Clearly was cramping pretty hard there in the end, running down everything.”

“Obviously I battled really hard in qualifying and had a real chance to really make my mark here,” Smith said.

“The disappointing thing was serving for the first set twice and my serve let me down a bit. If I get one of those games there, I am up a set and it is a different story, I think. It was a battle from then on.”

In his first match at the tournament since retiring with severe cramps while locked at two sets all against French star Richard Gasquet in 2015, Kokkinakis was again injured before blowing a two-set lead against Janko Tipsarevic.

“It wasn’t good. I was pretty disappointed with how I played,” Kokkinakis said.

“I was a bit flat going into it and even winning the first two sets, I still didn’t think that I was playing great. I tried to regroup in the fourth, played a terrible tiebreaker, but he played better than me. I was tentative. I wasn’t hitting out with my shots.

“I haven’t really regrouped. I am pretty pissed. I lied on the bench with my head up, looking at the ceiling. It is part tennis. Some matches you play terrible and you feel like hating the sport, where as other matches you have unbelievable wins and have good emotions.

“But I tell you what, losing feels a lot worse than winning feels good.”

The defeat means the Queenslander will likely slump to 147th in the rankings, leaving the one-time Grand Slam quarterfinalist and former world No.17 with a long road back to the upper echelons.