Thanasi Kokkinakis has produced a career-best performance to upset No.1 seed Tomas Berdych and advance to his first career ATP final in Los Cabos, Mexico. 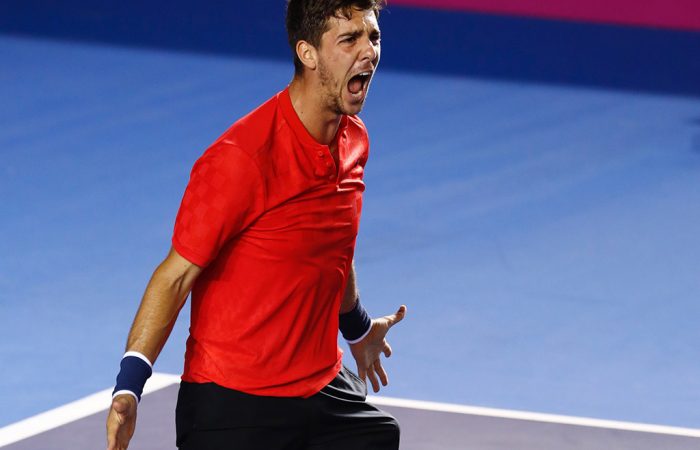 Thanasi Kokkinakis’s fine run of form has continued in Mexico with the Australian progressing to his first ATP tournament final with a win over Tomas Berdych in Los Cabos.

Kokkinakis, playing with a protected ranking but currently at No.454 in the world after a string of injuries, downed the Czech top seed in their semifinal, 3-6 7-6(5) 6-4.

He’ll take on Sam Querrey in the final after the American downed Damir Dzumhur of Bosnia and Herzegovina in the second semifinal 3-6 6-4 6-4.

"I haven’t played this many matches in 3 or 4 years." @TKokkinakis's comeback hasn't been easy…

“I showed some glimpses of good tennis this year, so to do that consistently this week in Los Cabos means a lot,” Kokkinakis told atpworldtour.com.

“I’ve had great support from the fans here all week. I love it here and I’ll definitely be coming back a few more times.”

Kokkinakis sustained the only break of the opening set against Berdych but served consistently in the second to level the match after victory in the tiebreak.

He picked up two breaks of serve to former Wimbledon finalist Berdych’s one in the decider to claim the match.

After a torrid two years in which he contemplated giving the game away, Kokkinakis returned in 2017 and impressed with a win over Milos Raonic at Queen’s Club while pushing former US Open winner Juan Martin del Potro at Wimbledon.

.@TKokkinakis asks to organise a special autograph session straight off court to thank his amazing fans in @AbiertoLosCabos. #ATC2017 pic.twitter.com/2TbjmGiTCl

While Los Cabos is a low key tournament on the tour with Berdych the top seed at No.14 in the world, it still represents a big opportunity for Kokkinakis.

The 21 year-old would shoot up almost 300 ranking places with a win over the in-form Querrey.

The American has a win on tour against Kokkinakis dating back to 2015, where he was victorious in three tight sets on clay at Madrid.