We caught up with former world No.4 and Grand Slam champion Sam Stosur during a training stint in Melbourne as she battles to be ready for the US Open. 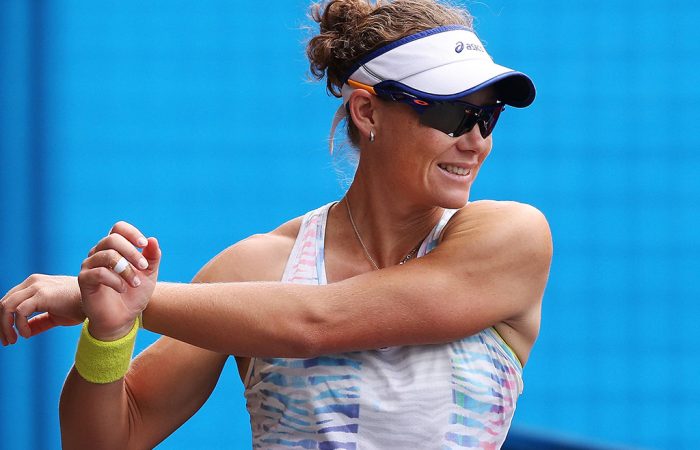 Sam Stosur has not played competitively since an injury-affected fourth-round loss at the French Open.

Stosur, who fell in three sets to eventual champion Jelena Ostapenko, was forced to skip the entire grasscourt season as she battled a stress fracture in her playing hand.

After seven weeks off, she resumed hitting – only to find it too painful. After more time off, she’s begun hitting – lightly – during a training stint in Melbourne this week.

We caught up with the former world No.4 and US Open champion as she works hard to be ready for a comeback at the site of her greatest career achievement.

Can you give us an update on your hand and how you’re able to train at the moment?

“Every time I went out there (to resume hitting) I was like, Oh, it’s a bit sore, but there’s a certain level where you have to expect there to be something (in terms of pain), but what’s too much? And then after a few days I was like, nah. It’s certainly not gonna help it. I took another couple of weeks off, then hit again on Monday and yesterday but again it’s just like 20 minutes, just feeding, mostly backhands, and slowly starting to work up. It’s been pretty good but it’s a little sore today so I’m gonna take today off and go at it again tomorrow. I’m still on the eight-year-old kids’ balls with low compression (laughter) so it’s pretty easy. This wouldn’t even qualify as a hit normally, but it’s a start.”

So what does this mean for your participation at the US Open?

“I’m entered in Cincinnati and I’m still hopeful I’ll get to New Haven. It’s just hard to say. If I feel ready (to fly to the US), yes, definitely. I really, really want to play, but I want to make sure I’m ready to play. I can only do what I can do day to day.”

Now that you’ve had a little bit of time to reflect, how do you look back at Roland Garros, where the injury struck?

“It’d been getting worse for three days (before the Ostapenko match) but at 4-1, 5-1 in the first set I was like, oh no, this is not good. I just kept on going and I thought if she doesn’t know that I’m hurt, I might just sneak through this match (laughter). But even if I’d won there’s no way I could’ve played the next day. The next few days after that I was pretty gutted because I really felt like it was a good opportunity (to do really well at Roland Garros) and to be in that position – and then she goes on to win the tournament a week later – I was like, oh, you never know. It’s not a guarantee by any means but I did feel like I was in a good position.”

Even if you haven’t been hitting much, I assume you’ve kept up other training? What have you been doing in your time off?

“I’m going to hopefully go out again tomorrow if the weather is alright and go for a long ride. I’ve been hiking on the weekends for a couple of hours. I’ve actually found it really enjoyable. I went back up to Queensland for 10 days; I was actually going up to start hitting with (coach) Josh (Eagle) – this is when I was thinking I was going to be hitting. So (instead) we went riding, we went kayaking, went for a walk through the national park, just kind of hung out for a few days and then I went to the Gold Coast and saw everyone down there, and then got back to work. It has been nice to have a bit of a routine; I didn’t get on a plane for five weeks and I was like, oh my god it’s been five weeks since I’ve been to the airport, this is incredible! Just little things like that have been kind of cool.”

Speaking of Josh – how is that coaching relationship going?

“It’s coming up to a year now, because we started in Cincy last year. He’ll do the rest of the year with me. I think we’re pretty much sorted with that. We’ve been together a year but we’ve only had a few weeks away (together) where it’s very hard to work on things when you play a lot. I think it’ll be good to get a bit more consistency once I can play again.

“He certainly hasn’t tried to change the way I play; I know the way I play best and he had that same vision, which is good. He’s really big on that belief and doing it every single day – you don’t shy away from playing the way you’re going to win the big matches. Sometimes it’s harder to execute that for whatever reason but if you’re trying to do that every single day, you’re going to get better and better at it and when you’ve got it you’re hopefully going to be able to hold it for longer. It’s more been about, when we’re on the court, keep using your forehand, be aggressive, do these things. We’ve looked at my first-serve accuracy and percentage, all these types of things. At certain times it’s been little focuses on (for example) that serve, or really going after your forehand, or, nah, footwork’s not good enough, let’s during these sessions really move your feet. More little goals that I’ll hopefully start to put together. Which I had finally started doing before the injury (laughter).”