After his second-round win on Saturday, world No.2 doubles player John Peers sat down with tennis.com.au to discuss Wimbledon, Australian Open success and fatherhood. 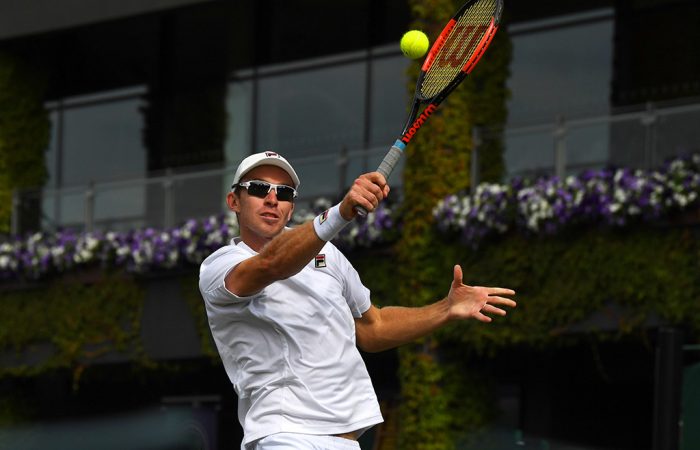 No.1 seeds John Peers and Henri Kontinen are through to the third round of the men’s doubles event at Wimbledon after a 6-3 6-4 6-4 win over British wildcards Scott Clayton and Jonny O’Mara.

Peers, the world No.2 doubles player who with Kontinen is the reigning Australian Open champion, sat down with tennis.com.au to chat about Wimbledon so far, his exploits at home and how life has changed since becoming a father.

After a tough opening round, how do you feel you’re settling into the tournament after today’s straight-sets win?

“There’s never an easy match here at any Grand Slam. Henri and I started a bit slow in our first round and to be honest started a little slow in this match when got down a break early in the first, but then we were able to break straight back and then got on top of things and just kept the ball rolling which was good. Just being able to build pressure but getting an early break each set helped us out today which was nice.”

You reached the semis in ‘s-Hertogenbosch and the quarters in Queen’s. How happy were you with your grasscourt preparation coming into Wimbledon?

“It was nice. It’s always good to get a couple of matches under the belt and get ready for a Slam. Queen’s and ‘s-Hertogenbosch are always two good events to play so it was good fun to get out there.”

You played with Jordan Thompson in ‘s-Hertogenbosch. How was that, and what’s the experience like to move away from your regularly partner and play with someone else before a Slam?

“Henri just didn’t want to play that week and I wanted to get a couple more matches on grass after the French, which didn’t go as planned. I knew Thommo was looking and it’s always good fun to get to play with another Aussies.

Good for Davis Cup too, I imagine …

“It’s great to have options, but it’s always good to get back playing with guys you spend so much time with around Davis Cup, so it’s good fun.”

The past two years at Wimbledon, you’ve reached the final (2015) and quarterfinals (2016). How much do those experiences help you when you play the tournament this year?

“It’s always good. I’ve always felt comfortable here on the Wimbledon grass. To be able to get into the second week is always what you try and do once you start the tournament so to be able to do that now, it just gives you confidence to know you’ve been there, you’ve been through deep in the tournament and you’re comfortable with whatever comes – we’ve dealt with the rain here, dealt with some nice warm weather, so it’s always nice (to be here). It always feels good and almost like a second home.”

In January you won the Australian Open with Henri for your first Grand Slam title. How has that experienced carried through the rest of the season? Do you still think about it?

“I’m still trying to pinch myself to believe I actually am a Grand Slam champion. I was actually really mentally exhausted for a few days straight after and then got ready to go up for Davis Cup which was really good fun and it was a great team environment – the boys helped me get up for that which was a lot of fun.

“It was just the mental (side at the Australian Open), to get up for every match and to keep going and going and going. It was nice to get through those first couple of days (afterward) where I took a couple of lighter (training) days and then to have a good Davis Cup tie was even better. Then I was able to take a couple of weeks off, which was really good fun.”

You became a father when your daughter Ellie was born in May. How has the experience of becoming a parent impacted your daily life and your tennis career?

“It’s been great. She’s only been around just seven weeks now, and to be a father is something that just puts everything in perspective and you really learn to enjoy your family time and enjoy what you’ve got at home. To be honest, to be able to go back to them, win or lose, she’s always got a smile on her face and at the end of the day it’s always great to get back and see her.

“You’re forced to detach yourself from tennis more and make your priority your child, and that’s great to put tennis in perspective and make it a game we still love and enjoy playing, but to be able to take your mind off it as well when you get home. I think it just throws another dimension into where you are in life. It’s really nice to be able to have your family around a lot more often.”

Now you’re in the third round of Wimbledon doubles, you’ll play qualifiers Hugo Nys and Antonio Sancic. What do you know about them and how will you prepare?

“We’ll just go back and watch a little bit of footage tomorrow; don’t know either one really well. Especially at Wimbledon when the courts are this quick it’s about focusing on what you can control and worrying about bringing your level each day so that’s gonna be the main focus. So we’ll find out a little about these guys and then go from there.”