Australian legend Todd Woodbridge believes this is the start of an exciting new Davis Cup era. 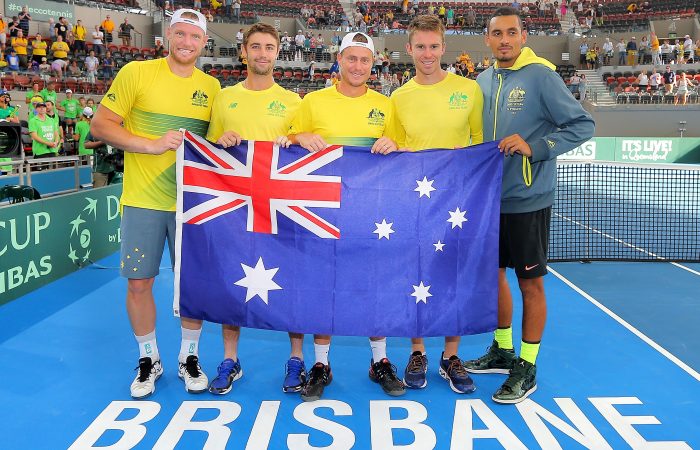 “It was one of the best and most positive performances I’ve seen from an Australian Davis Cup team in a decade,” Woodbridge said of the 3-2 victory at Brisbane’s Pat Rafter Arena.

“What makes it even more impressive is that this a new team and a young team. They’ve created a great energy and have a lot of self-belief. I think this is the start of an exciting new era for us.”

World No.16 Nick Kyrgios impressed, winning both of his singles rubbers in arguably his best Davis Cup performance. But Woodbridge, who holds the Australian record for most Davis Cup doubles wins in a career that spanned 32 ties, also credited much-improved 22-year-old Jordan Thompson who upset world No.15 Jack Sock on the opening day.

“Jordan was the real stand out for me, he showed great self-belief in his win against Jack Sock. I’ve been around a lot of Davis Cup ties and know how hard it is to go out there in the first rubber, where there is a lot of pressure and expectation, but he looked like he belonged and pulled off one of the best underdog wins in a Davis Cup tie I’ve seen in a long time.

“That result turned the tie on its head – the Americans would have been banking on winning that match and then for them to end day one down 2-0, I think they felt it was a long way back from there.”

Woodbridge is confident the Australian team can carry the positive momentum further, starting with a semifinal in Belgium in September.

“It shapes as a tie between two evenly-matched nations. Belgium have (world No.14) David Goffin who has been one of the most consistent players in the world in the past 18 months. He might not be as dynamic as Kyrgios, but he’s a class player. The No.2 singles players are also very similar, although in the doubles I feel we’re stronger. Given that, I believe Australian has an extremely good chance,” he said.

Woodbridge doesn’t believe playing away from home will be a disadvantage either.

“This team can rise above it. I’d be expecting a neutral and fair crowd anyway, very similar to Australian fans. It’ll be a good environment to play in, the Belgian crowd shouldn’t be as hostile as it could be if it was played elsewhere, like in South America or Spain,” he said.

“I expect it to be played on an indoor clay court to try and nullify the Kyrgios affect. The strength of Goffin’s game is his consistency and movement, which is enhanced on the clay and will be the key for him to beat Kyrgios.”

An Australian victory would qualify the team for a first Davis Cup final appearance since 2003, when Woodbridge and current captain Lleyton Hewitt led the nation to its 28th title.