Australia must win one of their two remaining singles matches to progress to the Davis Cup semi-finals after John Peers and Sam Groth were beaten in a five-set doubles arm-wrestle on Saturday against the United States. 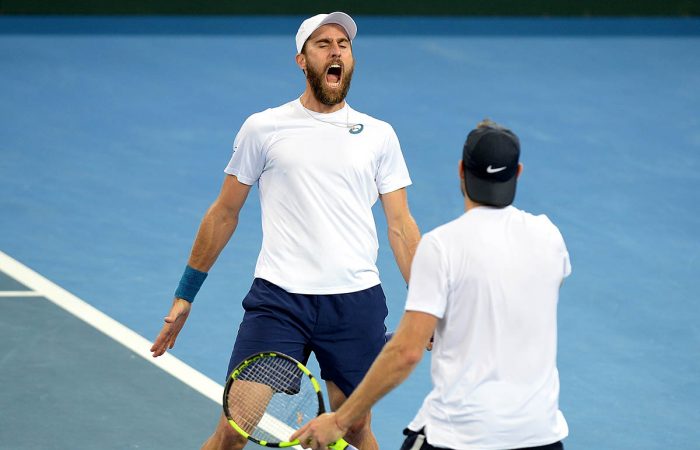 Australia must win one of their two remaining singles matches to progress to the Davis Cup semi-finals after John Peers and Sam Groth were beaten in a five-set doubles arm-wrestle on Saturday against the United States.

Peers and Groth fell 3-6 6-3 6-2 2-6 6-3 to Jack Sock and Steve Johnson, with the margin in the World Group quarter-final tie now at 2-1 after Jordan Thompson and Nick Kyrgios triumphed in their singles matches on Friday at Pat Rafter Arena.

Kyrgios faces Sock in Sunday’s opener but if the 21-year-old can’t finish the job, it will fall to world No.79 Jordan Thompson in his daunting clash with John Isner.

US captain Jim Courier originally nominated Sam Querrey as one of his doubles players but had telegraphed the possibility of a late change, which he made by summoning Sock – the top-ranked player in the tie at No.15 in the world – an hour before play.

Sock looked exhausted as he was dispatched by world No.79 Thompson but Courier said he would have no hesitation sending him back into action, having won America’s last doubles match alongside Johnson against Switzerland in February.

The decision looked poised to backfire as Peers and Groth raced out of the blocks to win the first set in just 27 minutes, and they looked good value to continue their positive Davis Cup run after previous doubles wins against the Czech Republic and Slovakia.

But the US soon clicked, firing back to win the second and third sets as Sock rediscovered his touch and his confidence.

Australia surged back into contention after a Groth forehand down the line secured the crucial break in the fourth set.

However, their momentum was snapped when the US broke to love off Peers’ serve, and then snuffed out any chance of an Australian comeback to keep the tie alive.

The winner of the quarter-final will face either Belgium or Italy in September’s semi-finals.