Australian captain Lleyton Hewitt is aiming to lead his team into the Davis Cup semifinals. 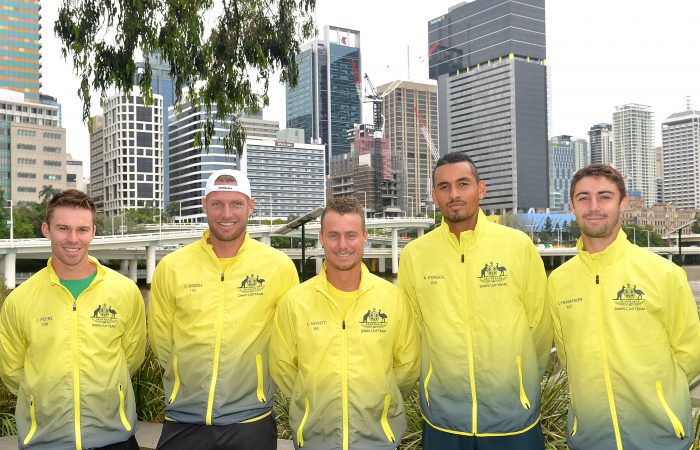 Lleyton Hewitt says Australia’s Davis Cup quarterfinal against the United States will be made more special because it could be one of the last times they play in the best-of-five format.

The International Tennis Federation will vote in August to determine whether ties from next year will be reeled back to three-set matches which would be played over two days instead of three.

It’s a move aimed at winning more support from the world’s top players for the competition.

Hewitt, a traditionalist who prefers the current structure, said the mooted change would add extra gravitas to their clash with the US, Australia’s long-time Davis Cup rivals, at Brisbane’s Pat Rafter Arena.

“It’s not every day you get put in a quarterfinal tie at home where you can try and make it to the final four of the Davis Cup anyway.

“We’ve got a couple of younger guys that haven’t played many ties in the past and we sense this is a great opportunity for us to make the semis.

“More importantly we’re focusing on what we can do now (instead of) whatever happens in the future and how the competition looks.

“Right now, we want to give ourselves the best opportunity. It would be pretty special to get to the final four.”

The winner will face either Italy or Belgium in September’s semifinals.

US captain Jim Courier said he was keen to live in the moment rather than worry about future Davis Cup ties.

“All of them feel special in their own ways and you can take a look at the big picture but it’s more fun, I think, to isolate them and feel the energy that surrounds each tie individually,” he said.

“We don’t know what’s going to come, we’re not part of that process intimately. Whatever the future holds for Davis Cup, hopefully it will continue to become a better competition overall.”