Daria Gavrilova was forced to fight hard in the second set before subduing Yanina Wickmayer to advance to the third round at Indian Wells. 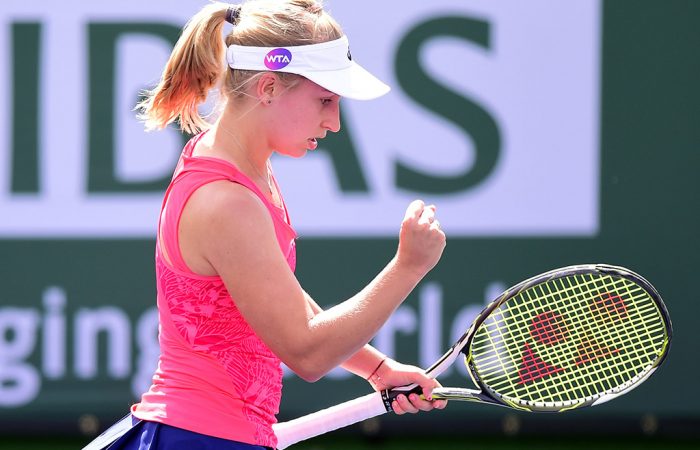 Daria Gavrilova on Friday got her tournament at Indian Wells off to the perfect start with a straight-sets win over Yanina Wickmayer.

The Australian’s 6-2 7-6(5) victory over the former world No.12 sends her through to the third round where she will next face 10th seed Elina Svitolina.

“Definitely an advantage that I managed to win under two hours and she played for three hours,” Gavrilova told tennis.com.au.

“She’s actually played a lot of matches – she hasn’t lost a match since like before Fed Cup. I’m sure she’s a bit tired; not just because of the match here but because she’s had enough tennis.

“But she will be clutch on big points for sure because when you’re that confident you’re just fearless.

“It’s going to be tough, but I’ve beaten her before and our head-to-head is pretty tight (Svitolina leads 3-2). So it’s gonna be another good match and hopefully I can get a win.”

Gavrilova, seeded 24th, began brilliantly against Wickmayer with a break in the third game which she consolidated for a 3-1 lead.

Although Wickmayer was dangerous when she was given time to set up or control the centre of the court, Gavrilova ensured she was never given much leeway to dictate, varying her spins and paces and yanking the Belgian from side to side when presented with the chance to be aggressive.

Gavrilova also forced Wickmayer to press thanks to impressive court speed – in the seventh game of the first set Gavrilova sprinted to chase down a drop shot and produced an incredibly-angled winner in reply.

She would go on to break the world No.68 again and served out the set in the next game.

Gavrilova broke early in the second set but couldn’t hang on to her advantage, and when Wickmayer broke back in the fourth game for 2-2, games went on serve for the remainder of the set.

Across the sixth and eighth games Gavrilova saved a collective three break points before eventually sending the set to a tiebreak.

She arrived at match point with a lovely drop-shot winner; Wickmayer thought she’d erased that on the next point with an ace out wide. Yet Gavrilova challenged the call and was correct – the serve had missed the sideline by mere millimetres.

Wickmayer promptly double-faulted to hand the Aussie victory in one hour, 44 minutes.

“It was a tough match. She’s a tough opponent, as is everyone here really,” Gavrilova said.

“And I was happy with how brave I was when I was break points down, throughout the whole match really. Actually looked at the stats and my winning percentage ons second serves and first serves was pretty high. So I was happy about that.”