John Peers and Sam Groth have secured Australia's place in the Davis Cup quarterfinals with a straight sets win in the doubles. 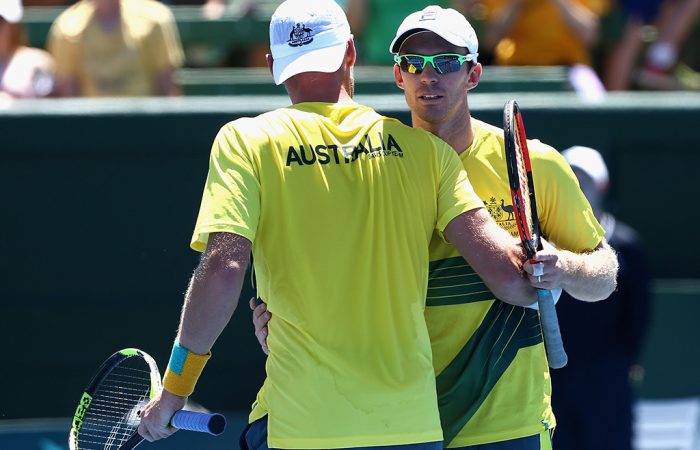 Australian captain Lleyton Hewitt called on his doubles pairing John Peers and Sam Groth to make an statement and they responded with an emphatic victory to seal the Davis Cup tie against the Czech Republic at Kooyong.

Following the singles success of Nick Kyrgios and debutant Jordan Thompson on Friday, Peers and Groth crushed Jiri Vesely and Jan Satral 6-3 6-2 6-2 on Saturday to give Australia an unassailable 3-0 lead.

Australia are now set to host a World Group quarter-final match-up on the weekend of April 7-9, against the USA, who hold a 2-0 lead over an undermanned Swiss outfit.

Hewitt said he wanted his doubles pair to deliver against the inexperienced Czech duo, who had never played together.

“I kept testing them to go out there and make a real statement and they did that right from the start,” Hewitt said.

“They hardly put a foot wrong; the boys played extremely well, that was high quality.”

Fresh from winning the Australian Open men’s doubles title with Finland’s Henri Kontinen, Peers and the big-serving Groth were a class above their opponents.

In the third set the Australians didn’t lose a point on serve.

The Czech team were rocked by injury on Thursday with veteran Radek Stepanek, who has won 18 doubles titles on the ATP tour, suffering an unspecified issue.

Singles specialists Vesely and Satral had no answer to the court nous of Peers, who is ranked sixth in the world in doubles, and Groth, who also frequently plays the format.

While the Australians were missing No.2 Bernard Tomic, the Czech team were without world No. 12 Tomas Berdych, who said he wanted to focus on the ATP tour.

Adam Pavlasek (No.83) and Lukas Rosol (No.144) were also unavailable for selection, leaving Satral (157) the next best player.

Long-time Czech captain Jaroslav Navratil said they had no answer to the strike-power of the Australians, even without Tomic.

“Australia have a very good team so if you’re coming without three players; No.1 player and top player Tomas is always difficult,” he said.

“Jan and Jiri was trying the best to save on the court and Australia was much, much better, especially today you see how good doubles team is Peers and Groth.”

The dead singles rubbers will complete the tie on Sunday.