John Peers and Henri Kontinen prevailed past the Bryan Brothers 7-5 7-5 to land a maiden Grand Slam title as a pairing. 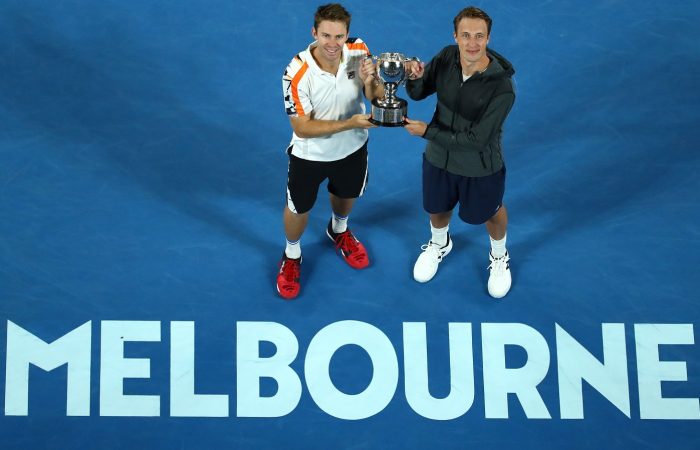 John Peers is the first Australian man to lift a Grand Slam men’s doubles title since 2005 having fended off the challenge of the Bryan Brothers 7-5 7-5 alongside Henri Kontinen.

“It is an amazing feeling. I was looking through some of the names on the trophy. To be alongside some of the guys and idols I looked up to in the past is something that hasn’t sunk in yet.

“To be able to do that and be a part of what Australian legacy has been with tennis is something I was dreaming of as a child,” declared Peers, who also becomes the first Australian to reach the Melbourne Park men’s doubles finals since Todd Woodbridge won here in 2001 with Jonas Bjorkman.

“It’s a humbling sort of experience and something that I’ll never take for granted.”

In the post-match speech the Bryans acknowledged their opponents had been “red hot” and they were pretty accurate.

The fourth seeds, who defeated the American twins on route to the Paris Masters and ATP World Tour Finals at the back end of 2016, struck 22 winners to steal the first set just before a tie-break was required with some alert net play.

The Bryans were aiming to add to their six titles at Melbourne Park to draw level with John Newcombe’s record of 17 doubles majors, however Kontinen/Peers pounced once again at 6-5 to clinch their first Grand Slam title as a pairing with a sumptuous lob onto the baseline from the Australian.

“That was definitely one of the greatest shots I’ve hit, and to do it on our second match point was really good. I was luckily enough to pull it off, feels really nice.”

A host of Finnish supporters made it into Rod Laver Arena to cheer on Kontinen too, the first male or female from his country to even contest a Grand Slam final.

The 26-year-old is delighted to keep their unbeaten record against the Bryan Brothers intact.

“They’re always going to be a tough team to beat. To do it now three times in a row is great for us. We know next time we play them, it’s going to be a battle again.”

The Kontinen/Peers duo strive to keep on improving and hope to add more trophies to their cabinet in 2017 after such a sublime start.

“Obviously this already puts us in there going towards London, end of the year (ATP Finals). But we’ll do the same thing as we did last year. We’re going to have bad weeks, unfortunately. But everybody does, bad matches,” reflected Kontinen. “We’re just going to do the same thing, stay positive, try to improve individually and as a team. We’ll see how the year ends.”