An Australian will be in the men’s doubles final after fourth seeds John Peers and Henri Kontinen dispatched Melbourne locals Marc Polmans and Andrew Whittington. 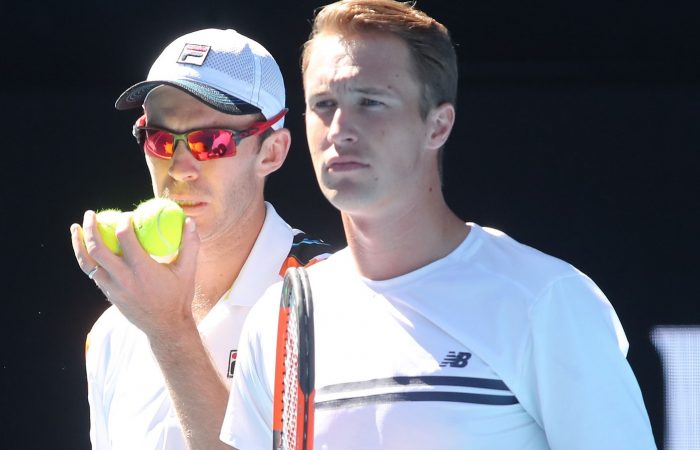 An Australian will be in the men’s doubles final after fourth seeds John Peers and Henri Kontinen dispatched Melbourne locals Marc Polmans and Andrew Whittington in straight sets 6-4 6-4.

“Yeh it was great to make our first (slam) final here together in Australia, it’s an amazing feeling for us,” declared Peers.

“We set out at the end of last year to try and build on what we achieved at the end of 2016, to perform better in the Slams and Masters events.

“To be able to do this in Australia, on Australia Day, is a humbling experience, but hopefully we can go one step further on Saturday.

Wildcards Polmans/Whittington had dispatched No.1 pairing Nicolas Mahut and Pierre-Hugues Herbert in the quarter-finals but were undone by a dominant display from the ATP World Tour Finals champions.

“Yeh we knew it was going to be a tough one, they’ve beaten some top teams over the tournament and played some great tennis, but happy to play as well as we did,” said Kontinen.

Aussie Peers and Kontinen only hit eight unforced errors and served with aplomb (71 per cent first serves in) to book a place in their maiden major final against six-time champions the Bryan Brothers.

Peers/Kontinen prevailed in their last two meetings, defeating the formidable Americans on route to the Paris Masters and ATP World Tour Finals trophies at the back end of 2016.

“We know they’re going to be a good team, it’s just a matter of whether we can produce the right tennis on the day. If we can take our chances we’ll be in a good position,” added Peers. “It’s going to be another tough one, hopefully we can repeat that performance.”