Jack McLean from Casino, NSW was today named the 2016 ANZ Tennis Hot Shot of the Year at Rod Laver Arena on day four of Australian Open 2017. 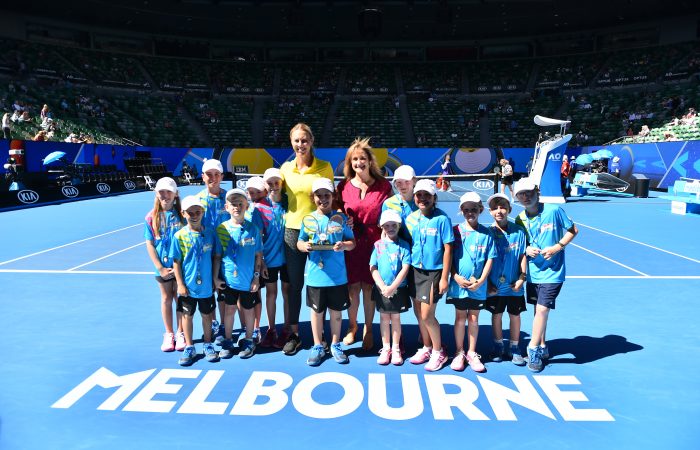 Jack, the June nominee, and 11 other participants received a VIP Australian Open experience this week including a behind the scenes tour during the tournament, a meet and greet with Novak Djokovic and the opportunity to watch some of their favourite tennis players on court.

The ANZ Tennis Hot Shot of the Year award is given to a participant who demonstrates his enthusiasm, enjoyment of the game and holds sportsman-like qualities. Jack was selected as the winner by a panel of judges from Tennis Australia and program sponsor, ANZ.

Thanks to the ANZ Tennis Hot Shots program, Jack will receive a year of free tennis coaching, one private coaching session with Molik and a $5,000 cash prize.

Talking about his excitement, Jack said: “I love Tennis, I wish I could play it all day. I had the best time at the Australian Open and I can’t believe I’m the 2016 ANZ Tennis Hot Shot of the Year. I’m so excited for my coaching session with Alicia Molik and to tell all my friends about it today.”

ANZ Head of Marketing Australia Carolyn Bendall added: “As a proud sponsor of ANZ Tennis Hot Shots, ANZ is committed to growing the sport of tennis right across the country. Jack demonstrated such admiring commitment to the sport and we are delighted to be able to give him a lifetime experience at the Australian Open and continued support through the year.”

ANZ Tennis Hot Shots is Tennis Australia’s official development program specifically designed for primary school-aged children between five to 12 years of age. In 2015/2016 the program had 213,883 registered participants in Australia.

For further information about the program please visit hotshots.tennis.com.au.