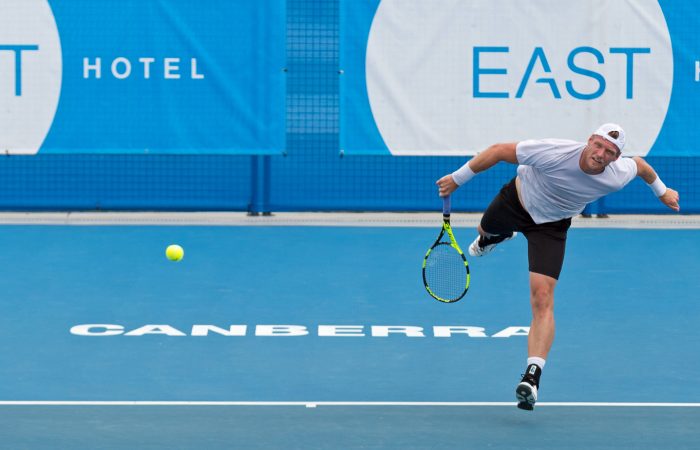 Sam Groth has made his way to the quarterfinals of the East Hotel Canberra Challenger 2017 on Wednesday after a stirring 4-6 6-4 7-6(2) victory over second seed Gerald Melzer of Austria.

The big-serving Aussie was pushed all the way but prevailed in a final set tiebreaker for the second consecutive day after recovering to defeat Indian Vijay Sundar Prashanth in the opening round by a similar margin.

Melzer looked in control early, taking the opening set in 34 minutes, but Groth gained some momentum from the support of a large crowd running out the second set and then breaking early in the last. However, the Austrian world No.84 was not to be denied, capitalising on a loose service game from the 29-year-old Victorian to send the match into the decider, which Groth controlled from the outset.

“For me to beat another quality opposition and get into the quarters is great for my confidence,” Groth said. “The real positive for me is that through most of last year I lost a lot of these close matches, so to beat Herbert in Brisbane and now to beat Melzer here and win some of these matches that are going down to the wire is a good turnaround.”

“These are the guys that when I was playing at my best I felt like I could be beating so to be doing it early in the year after having a good off-season is all positive,” he added.

Melzer joined third and fourth seeds Pierre-Hugues Herbert of France and Argentinian Renzo Olivo in failing to advance to the quarterfinals in Canberra, with the pair losing to 17-year-old Canadian Denis Shapovalov and 33-year-old Colombian veteran Alejandro Falla respectively.

For Groth, he now finds himself up against Israeli eighth seed Dudi Sela who has himself looked in solid form so far this season.

“Dudi had a good week in Chennai last week and he’s obviously confident, but so am I,” Groth said. “I’m ready to go.”

Earlier on Wednesday, Victorian wildcard Andrew Harris came close to upsetting the tournament’s top seed Jan-Lennard Struff after holding a break in the final set, but he eventually succumbed to the German’s experience, falling 6-1 3-6 6-4.

Sydney’s Aleksander Vukic, 20, also found himself on the wrong side of the ledger, losing in straight sets to fifth seed Konstantin Kravchuk of Russia.