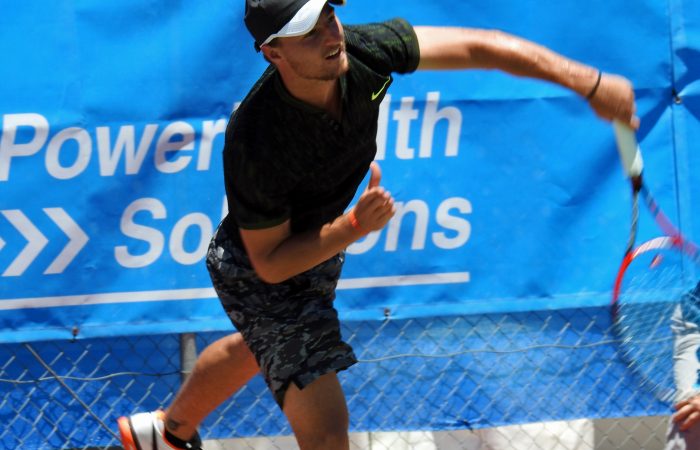 Wildcard Omar Jasika has proven too strong for Canadian Peter Polansky, moving swiftly into the semifinals of the City of Onkaparinga Tennis Challenger in Adelaide on Friday.

The 19-year-old Victorian has been in sparkling form since winning the The Australian Open 2017 Wildcard Play-off at Melbourne Park last month and while he stuttered early in the heat at Happy Valley against the fourth seed – trailing 0-3 in the opening set – he soon righted the ship to take the match 6-4 6-2.

“It was tough out there today,” Jasika said. “But I think overall I played very solid. The longer points were working well for me, so I just tried to stay in there as long as possible.”

Polansky, the world No.135, defeated Marc Polmans earlier in the week and Jasika admitted to learning what he could from his fellow Aussie teenager. “I got a few tips from Marc, you know, but mainly I just tried to focus on my own game,” he said. “I think it matched up pretty well today.”

The win sees Jasika enter his second career semifinal at ATP Challenger level after he reached the same stage in Canberra late last year, ultimately losing to Polmans on that occasion.

Standing in his way this time is unseeded Belgian Joris De Loore, a straight sets winner over Marton Fucsovics of Hungary on Friday.

“I’m going to go out there with the same mindset,” Jasika said of the upcoming encounter. “I’ve had a few good weeks so whatever happens I’m not going to be too hard on myself.

“I had a really good off-season before the Play-Offs. I was training hard and I think that really helped me. I gained a lot of confidence after that and now I think the ball’s rolling a little bit. I don’t want to jinx it but hopefully it keeps on rolling.”

In other quarterfinal action, German Peter Gojowczyk continued his impressive run in Happy Valley, upending Ruben Bemelmans 7-6(6) 6-4. The Belgian was responsible for knocking out top-seeded American Donald Young in the opening round.

Gojowczyk will face the only seed left in the tournament, American Denis Kudla (No.3), who advanced to the semifinals after defeating his doubles partner this week, Barbadian Darian King.