Groth through in Brisbane 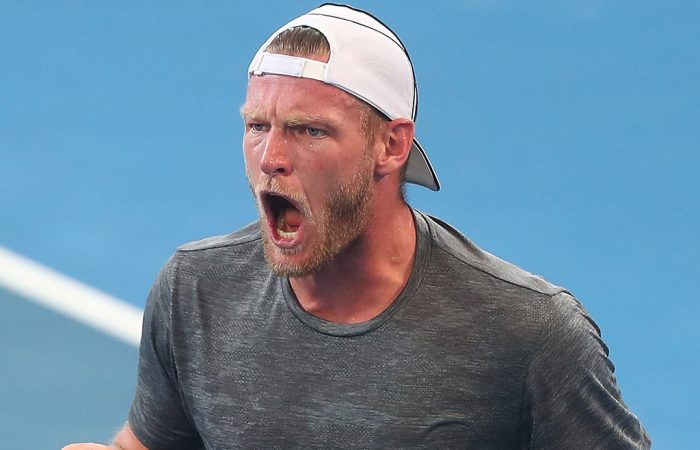 Sam Groth is ready to build on his first ATP win in six months after holding his nerve against Frenchman Pierre-Hugues Herbert to move into the Brisbane International’s second round.

The big-serving Groth had a shaky second set but recovered to win 6-3 5-7 7-5 at Pat Rafter Arena on Tuesday, and will ride his wildcard entry into a second-round match with Austrian fourth seed Dominic Thiem.

The Victorian is the second Australian in the second round, beside Jordan Thompson, but hopes of a third were dashed when Spain-based 17-year-old Alex De Minaur fell 6-3 6-3 to German stalwart Mischa Zverev on Tuesday night.

It was Groth’s first tour victory since beating world No.315 Michal Przysiezny in the first round of the Newport event last July.

The 29-year-old is coming off a horror season in which his world ranking dropped to No.272 in September – way down from his career high of No.53 midway through his breakout 2015 campaign.

Groth has since improved to No.180 and moved freely against Herbert, smacking 20 aces – including one to win the match.

He felt as if he’d been “written off” after his recent struggles but declared himself fully fit and ready to swiftly return to the world’s top 100.

“Last year I probably came in with a lot of expectation on me. My face was sort of everywhere for the summer,” the 2015 Newcombe Medallist said.

“I came in underdone after having foot surgery in the pre-season, and my year never really took off.

“But, you know, it wasn’t the worst year of my life. I had some great experiences and I went to the Olympics, played centre court at Rod Laver, played Rafa at the French (Open), played Nishi (Kei Nishikori) at Wimbledon, bought two houses.

“It’s not like I’m in a bad place mentally or I feel bad with my life. It was just a bad tennis year and hopefully now I can bounce back.”

Groth – only playing in Brisbane because a hip injury to fellow Olympian John Millman saw a wildcard flicked his way – had break points at 5-5 in the second set against world No.78 Herbert but was unable to capitalise, eventually wrapping up the match in two hours and 10 minutes.

He has faced Thiem twice before, copping straight-sets defeats on both occasions last year.

“I’ve got nothing to lose again. There’s not the expectation on me. It’s all going to be on him,” Groth said.

“For me, I can come out free swinging a little bit.”

For all tournament information, visit brisbaneinternational.com.au.