Alex De Minaur and Andrew Whittington will both feature in a Grand Slam main draw for the first time after receiving main draw wildcards into Australian Open 2017. 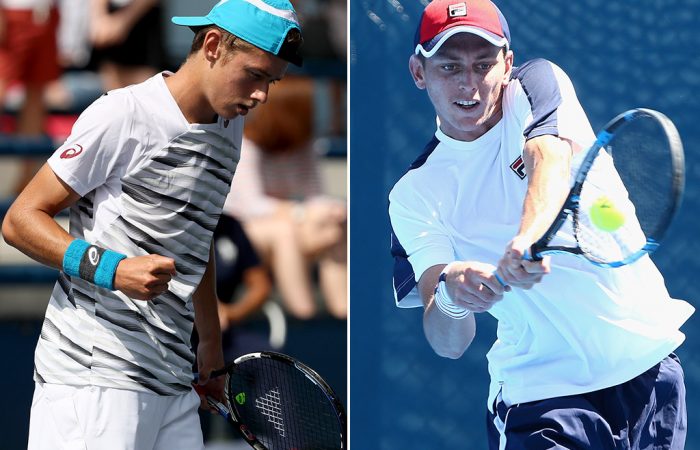 Alex De Minaur (NSW) and Andrew Whittington (Vic) have been awarded wildcards into the main draw of Australian Open 2017.

Alex De Minaur, 17, was the 2016 junior Wimbledon finalist and has already made his mark in Brisbane this week, moving into the main draw after winning two tough qualifying matches over top seed Mikhail Kukushkin and rising USA star Frances Tiafoe.

He will now meet German veteran Mischa Zverev in the first round of what will be his ATP main draw debut.

De Minaur, who has bases in both Sydney and Spain, has had a spectacular rankings rise from world No.1574 in January 2016 to a career high of 348 in December.

Andrew Whittington (Vic), aged 23, has also enjoyed his best-ever year on the tour, achieving a career-high world ranking No.170 in November thanks to six ITF titles and two ATP Challenger semifinals (Lexington USA and Happy Valley).

“I’d like to thank Tennis Australia for awarding me this wildcard and giving me a chance to compete with the world’s best,” Whittington said.

“I’m a Melbourne boy and this is a dream come true for me to be able to play my first Grand Slam main draw singles at the AO. I’m really excited to accept the opportunity and to play in front of my home crowd.”

Added Tennis Australia Managing Director Performance Wally Masur: “Wildcard decisions are always tough for the selectors, it’s very competitive at this level, whether it’s for the main draw or qualifying.

“Both Alex and Andrew have worked hard and achieved some good results this year and they, along with those competing in qualifying – both direct entry and wildcards – will do their best to take advantage of these opportunities during the Australian summer on their home courts.

AO men’s wildcards are as follows [world ranking in brackets]:

The following players have been awarded wildcards into Australian Open men’s qualifying: