The next generation of Australian tennis stars got a treat on Sunday when they were presented with their championship trophies by 2011 US Open winner Sam Stosur. 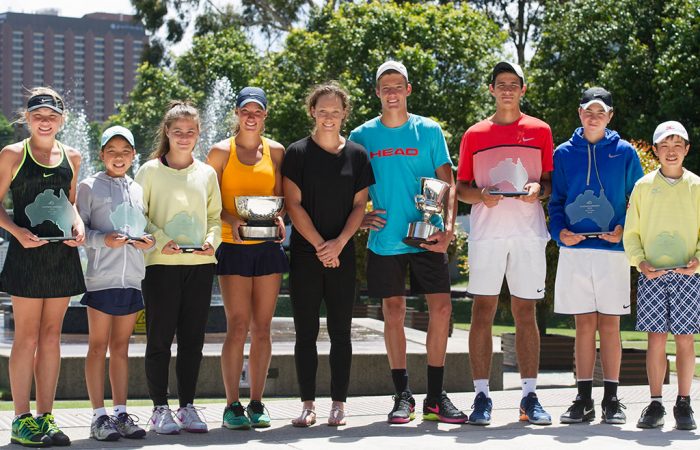 A star guest was on hand at Melbourne Park on Sunday to present the Australian Championships winners with their trophies.

Sam Stosur awarded the prizes to the winners and finalists of the 12/u and 16/u championships before posing with the players on the final day of action at the December Showdown.

“I was just walking out the gates the other day, and two 12-year-old girls came up to me and asked me for a photo. They were really cute, so I thought it’d be nice for me to come along to the presentation,” Stosur said.

“It fit into my schedule, and I was really glad I was able to come down here and hand out the trophies to all the winners and the runners-up.

“I’ve seen a lot of the boys and girls in the gym this week and on the practice courts in the National Tennis Centre, where I’ve been hanging out. I also practised a bit with Petra (Hule) from the under-18s, and I had a hit with Eddie Vo, who won the boys’ under-14s. He brought a few friends along and tried to take me down, but luckily I got the better of him in the end!

“They’ve both got a lot of talent and the standard of junior tennis is so high now, which bodes very well for the future.”