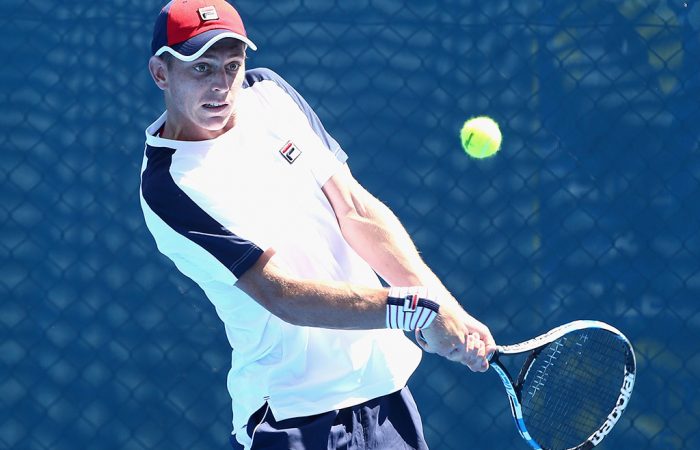 Andrew Whittington was given an almighty scare before securing a quarterfinal berth at the Australian Open-Playoff at Melbourne Park.

“By the fifth set you’re mentally and physically feeling it of course – you’ve just got to try and stay as strong as possible, back yourself. (Know) you’ve done the work,” Whittington said.

“And I think that showed in the end in the fifth set for me.”

Whittington, who entered the Play-off after a productive five-week training block on home soil in Melbourne, began strongly against Purcell, storming through the first two sets thanks to big serving and a heavy forehand which bullied the 18-year-old around the court.

Yet Purcell – who rose to prominence in 2016 with a Challenger title in Gimcheon, Korea, which he achieved by beating Whittington in the final – hit back.

He capitalised on some loose errors from the Victorian to secure a double break, and with the third set in hand he broke Whittington twice in the fourth to send the match into a decider.

Despite looking physically distressed and playing in his first ever five-set match, Whittington impressively wrested back momentum.

“The fifth set obviously changed again. I had a pretty good start, getting up 4-0, and then I think my game rose to another level and he maybe dropped off a little bit. Very nice to just get through in the end,” Whittington said.

This time last year, Whittington was ranked 592nd. He now sits at a career-high ranking of No.170 following a year in which he won six Futures titles and won his first ever ATP main draw match – he saved four match points against Luca Vanni to reach the second round in Shenzhen, a moment which he described as the highlight of his season.

“I made a decision at the end of last year I’d focus more on singles. I did a lot more of the one-percenters really well, and I think that’s helped me throughout this year,” he said.

The 23-year-old will face Smith in their first career meeting on Wednesday.

In other results, Gavin Van Peperzeel beat an injured Luke Saville, who retired when trailing two-sets-to-one in their first-round match.

Fourth seed Marc Polmans was clinical in his dismissal of 18/u Australian champion Scott Jones; the 19-year-old Polmans reached the quarterfinals with a 6-2 6-4 6-0 win.