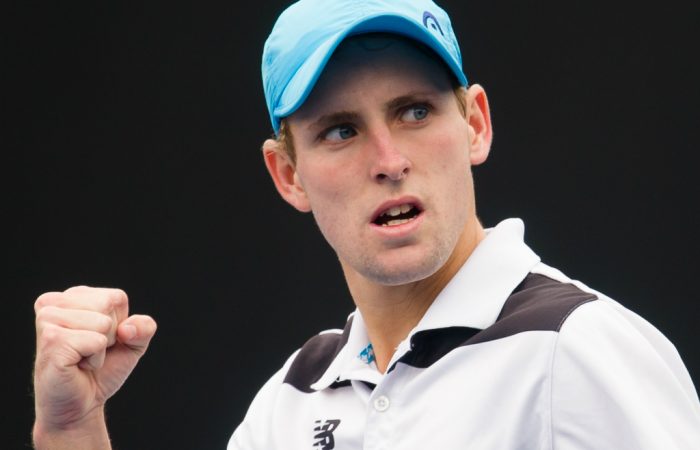 Wildcard Scott Jones claimed his first national title and a place in the 2017 Australian Open qualifying draw by beating No.4 seed Kody Pearson 6-2 4-6 6-4 to become the Australian 18/U boys’ champion.

The West Australian, whose 19th birthday falls during next month’s qualifying draw for the Australian Open, flew back from his first semester at the University of Tennessee to play in Melbourne, beating five of the eight seeds in the draw en route to the title.

“It’s going to be a bit of a dilemma,” said Jones of the prospect of delaying his return to the United States to compete for a place at the Australian Open. “I might miss the first couple of weeks of classes, but it’s going to be an awesome experience.”

Jones, who said his first national title had been “a long time coming,” credited his time in Tennessee for pushing him to a new level: “Everything you need right there and it’s been a great experience. I think for sure it helped today. That competitive environment isn’t what I’ve been used to and I think it’s helped my game a lot.”

On a chilly, overcast morning at Melbourne Park 18-year-old Jones raced out to a 5-0 lead before Pearson found a foothold in the match, fighting back in the second, saving a set point in the sixth game as he began imposing his aggressive game now that his flat ground strokes had found their range.

Midway through the final set Pearson turned his ankle, prompting a 10-minute delay for treatment. The New South Wales native did his best to outgun his opponent in the closing stages, but with Davis Cup captain Lleyton Hewitt watching from the wings Jones snatched the critical break before serving out to love, sealing victory in two and a half hours.

“He lifted his game – he started playing really aggressive, really good tennis,” Jones said of Pearson’s second-set fightback. “I started to get a little bit passive and he started to control the points a bit more, so I had to lift my court position forward and keep playing my game.”

For Pearson, who had targeted the semi-finals before the tournament, there is the consolation that his run to the final boosts his case for wildcards into Australian Pro Tour tournaments in 2017.