Lucas Vuradin is undefeated at the top of Group A after beating both his seeded opponents in the 18/u Australian Championships - his latest scalp was No.1 seed Alexei Popyrin. 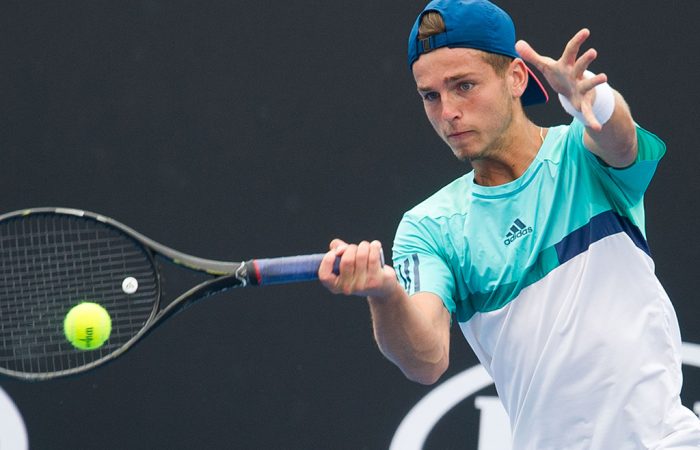 Lucas Vuradin has beaten top seed Alexei Popyrin in the round-robin stage of the 18/u Australian Championships at Melbourne Park.

With the top two-placed players from each group advancing to the knockout quarterfinals, the 17-year-old Vuradin is already assured of progressing.

Popyrin and Nkomba will battle it out to secure the second and final place.

> view the 18/u Australian Championships draw

In Group B, No.2 seed Stefan Skadarka lost his second round-robin match in as many days, with his hopes of reaching the quarterfinals now hanging by a thread.

Skadarka lost to seventh seed Alexander Crnokrak on Tuesday in three sets, but could still advance – depending on other results – if he beats Chase Ferguson in his final match.

Wildcard Scott Jones heads the group with two wins and no losses.

Third seed Mislav Bosnjak confirmed his place in the quarterfinals with a straight-sets win over Matthew Dellavedova in Group C, while No.5 seed Adam Walton did the same in Group D, taking his round-robin record to a perfect 2-0 with victory over fourth seed Kody Pearson.

If Pearson beats Moerani Bouzige in his final match, he’ll join Walton in the quarters.

In the girls’ 18/u event, top two seeds Destanee Aiava and Jaimee Fourlis on Tuesday booked their spots in the quarterfinals.

Both own 2-0 round-robin records and cannot finish lower than second in their respective groups; Aiava brushed aside seventh seed Michaela Haet 6-4 6-2 while Fourlis overcame No.8 seed Gabriella Da Silva-Fick in straight sets.

Sara Tomic, the third seed in Group C who has also won both her round-robin matches, could join them, but has not yet cemented her progression to the last eight.

Tomic, Kayla McPhee and Petra Hule, depending on results in the next matches, all could end the round-robin portion of the tournament with a 2-1 record, which would require a countback to see which two players progress.

Tomic plays Hule next while McPhee takes on Lisa Mays, who has lost both her matches so far.

In Group D, Priscilla Hon overcame Maddison Inglis in the battle of the tournament so far between defending champion (Hon) and Australian Open Play-off winner (Inglis).

Hon’s 6-3 3-6 6-2 win over Inglis moved her to the top of Group D; she will next face Aleksa Cveticanin, with a win pushing her into the last eight.