Sam Stosur's campaign at the WTA Elite Trophy in Zhuhai got off to a rocky start with a straight-sets loss to Johanna Konta on Wednesday. 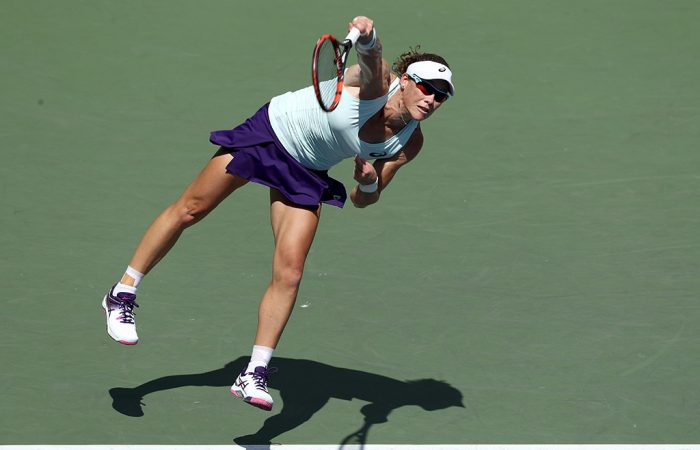 Sam Stosur’s late-season struggles have continued with a straight-sets loss in her opening match at the Elite Trophy event in Zhuhai.

Stosur went down 6-4 6-2 to British top seed Johanna Konta on Wednesday night and must beat Frenchwoman Caroline Garcia in her second round-robin match to have any hope of making the semifinals.

Australia’s world No.20 remains winless since the US Open in September, having lost her previous three first-round matches during a disappointing Asian swing.

New coach Josh Eagle was on hand as Stosur dropped serve four times in the defeat to the world No.10.

After assisting Stosur in August, Eagle has agreed to work permanently with the former Grand Slam champion in 2017.

Stosur said she appreciated Eagle’s style and the fact her fellow Queenslander gelled well with the existing members of her entourage.

“It will be almost fulltime (next year with Josh). He’s got a young son and can’t do everything,” Stosur said.

“For the most part he’ll be able to travel.

“We’ve only done a month – through Cincinnati and the US Open. So it’s all pretty new. But I liked what he thought about my game and his ideas to get me playing my best tennis again.