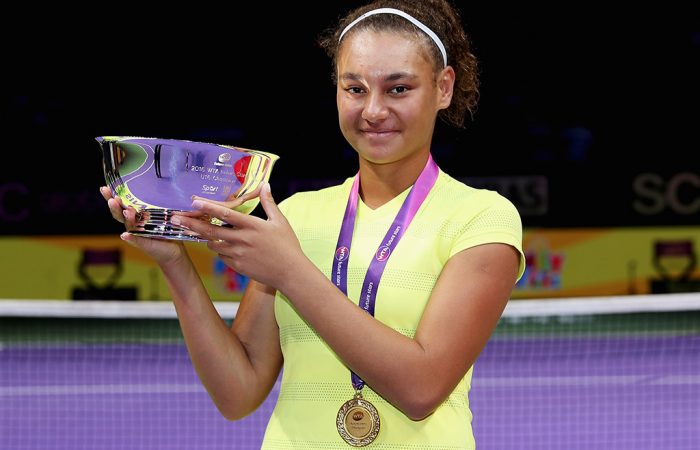 Over the weekend, Apisah, along with Canberra’s Annerly Poulos, represented Australia at the prestigious junior tennis tournament which runs alongside the WTA Finals’ elite.

The Aussie girls rubbed shoulders with the world’s top female players, including Australian Open and US Open champion Angelique Kerber, the world No.1.

“It’s been a great experience, meeting new players, travelling to Singapore for the first time, it’s an incredible place, I’m so grateful to be a part of something like this.

“This experience has inspired my to do more with my tennis … To travel more, and get experience against the up and coming generations because there is a lot of talent out there and I just need to keep pushing and training hard.

“It was so great to play on Centre Court in Singapore, it’s always been a dream of mine to play there. It was a great experience, I was really excited and nervous at the same time, but I’m really glad I got to play out there because all of the pros have played there.

“I think it was a really tough match. I just had to go for my shots and make sure I was capitalising on my forehand because my backhand wasn’t that strong, and Shivani was playing smart and picking up on my weaknesses.

“I just had to tell myself to, get back in it, go for it and make the most of my shots.”

“She’s a strong girl and she’s a big hitter from the back of the court … she has a great technique to her serve,” Molik told Fairfax Media.

“When she’s a bit more explosive, she’ll be better at moving up to the shorter balls. But I don’t see too many holes. She’s got the world ahead of her. I wasn’t that good at that age, and probably neither was Sam (Stosur).

“To play where the best eight players in the world are playing, to share that stage, is a pretty phenomenal experience as a junior. She definitely has the game to be a good player.”