Australian junior talents Violet Apisah and Annerly Poulos will rub shoulders with the biggest stars of women's tennis when they head to Singapore for the WTA Future Stars event. 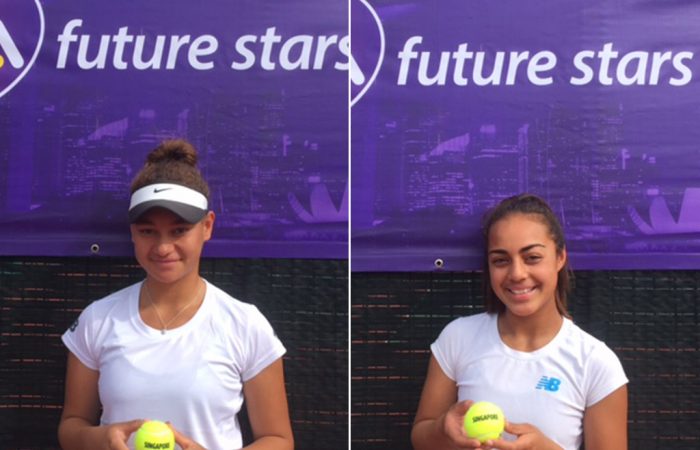 Sydney’s Violet Apisah and Canberra’s Annerly Poulos will represent Australia at the WTA Future Stars event in Singapore this week.

The prestigious junior tennis tournament – consisting of a 16/u and 14/u category – will be held alongside the WTA Finals, where the world’s top female players, including Australian Open and US Open champion Angelique Kerber and Roland Garros champion Garbine Muguruza, will compete for the final title of 2016.

Australia’s Fed Cup captain, Alicia Molik, said initiatives such as these are vital to the development of young players.

“This is an incredible opportunity for both Violet and Annerly, and I congratulate them on their achievements and wish them the best of luck in Singapore,” Molik said.

“Both of them have worked hard to qualify for Singapore and have proved they are competing at the top level in their age group here in Australia. The opportunity to compete against the best girls in the region will give them another taste of international competition, and I’ll be watching their progress with great interest.

“The WTA Finals is a fantastic event, with the top players in the world in competition. For Violet and Annerly, who represent our next generation of players, it’s a wonderful chance to see the world’s best in action, both on and off the court, and see up close what it takes to compete at this level.”

Sixteen-year-old Apisah was awarded the opportunity after winning the Oceania Closed Junior Championships in Fiji in August.

“It feels amazing to be chosen to represent Australia at the WTA Future Stars event in Singapore. To be in and around the top WTA players is an amazing opportunity and something I have dreamt of since I was a young girl. It’s incredible that I have been given this opportunity,” Apisah said.

“The WTA Future Stars is a great initiative to have in place for junior players. Having these experiences will definitely challenge me to improve my game in order to pursue my dreams.

“I would really love to compete at all of the junior Grand Slam events, and win a Grand Slam with my younger sister Patricia.”

Thirteen-year-old Poulos finished top of an Australian junior circuit points table to qualify for the 14/u section of the WTA Future Tennis stars program.

Poulos said she is thrilled to be heading to Singapore for the once-in-a-lifetime opportunity to play on the same stage as the stars of the WTA.

“It felt great to win my first ITF Junior tournament in Canberra. I am very determined to keep going and hopefully win many more in the future,” Poulos said.

“I’m extremely excited to go to Singapore, especially to see the top players play and learn from them.”

As well as having the opportunity to play on centre court at the Singapore Indoor Stadium, all competitors will join the top players at the WTA Finals draw ceremony and mingle with legends of the game.

Launched in 2014, the WTA Future Stars program aims to inspire and encourage young players. Thirty-six players from 18 countries across the Asia-Pacific region will compete from 19-23 October.

The competition consists of a two-day round-robin competition followed by semifinals and a final.

For more information about the event, draw and schedule please visit http://www.wtafinals.com/players/wta-future-stars.