Nick Kyrgios is gunning for the biggest title of his career after seeing off Gael Monfils in a memorable semifinal clash at the Japan Open. 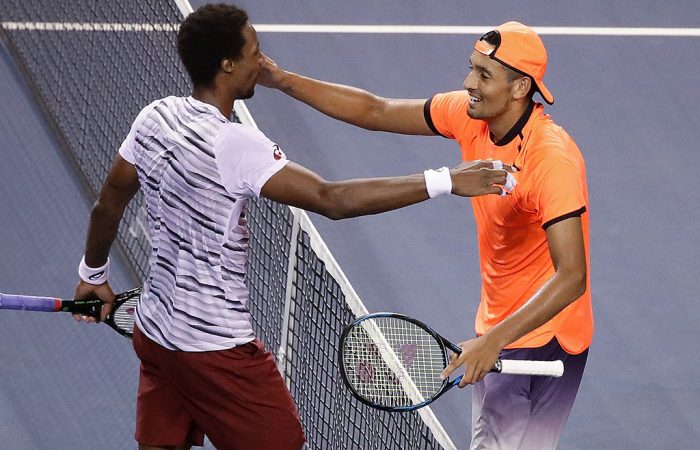 Australian Nick Kyrgios is into the final of the Japan Open after beating Frenchman Gael Monfils 6-4 6-4 in their semifinal in Tokyo on Saturday.

He will meet David Goffin in the final, after the fifth seed booked his place in the decider with a 7-5 6-4 victory over fourth-seeded Marin Cilic.

Torrential rain forced both matches to be played under the centre court roof.

Sixth-seeded Kyrgios made the decisive break in the seventh game of both sets in a crowd-pleasing match against Monfils.

“It was very entertaining. The crowd loved it and I had a lot of fun,” said Kyrgios, who grimaced at the fans whenever Monfils found an unlikely winner.

“He’s probably the only one who can play those shots. He’s an unbelievable entertainer and athlete, and the one guy I look up to on tour. I’d pay to watch him play,” Kyrgios added.

The 21-year-old Australian will be bidding to win his third ATP singles title.

Goffin trailed 5-3 in the first set before winning the next four games in the third victory this year against his Croatian opponent.

In March, Goffin beat Cilic in a Davis Cup tie, and then at Indian Wells.

“He won an ATP Masters 1000 event this year, and I’ve beaten him three times,” said Goffin, who has never won an ATP 500 event such as the Japan Open. His two career titles have been at the ATP 250 level.

“This year I have proved I have a high level. Maybe one day, maybe tomorrow, I can win a tournament like this.”