Hard work pays off for Cabrera in Tweed Heads 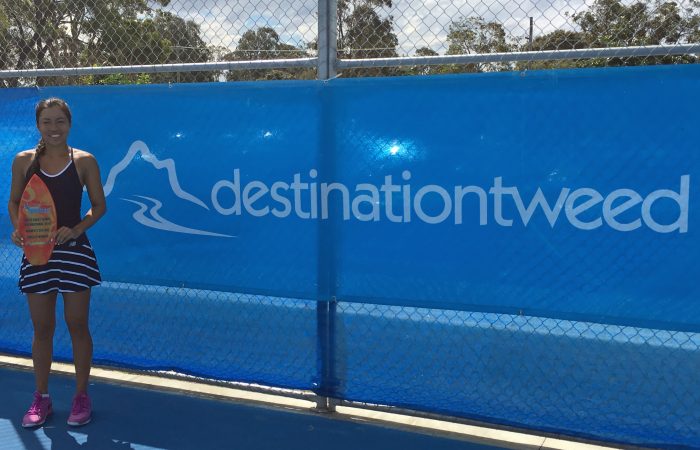 “I’m just really happy with the win,” Cabrera, who was unseeded in the event, said. “I’ve been working really hard and this is exactly the way I’ve been playing in training.

“It feels so good to finally implement that in matches.”

After going the distance in hot conditions to overcome the more experienced Olivia Rogowska in the semifinals on the previous day, the 18-year-old Queenslander backed up well to take the title over the also-unseeded Aiava 6-3 5-7 6-2 in just under two hours.

“I hadn’t actually watched a lot of Destanee,” Cabrera said of her 16-year-old opponent, who bundled out American top seed American Jennifer Elie in the semifinals. “She’s so young but she plays really well – and she’s such a strong girl.

“But my game plan stayed the same. Just come out and be aggressive and have a really good attitude to give myself the best possible chance.”

Cabrera did exactly that, and despite Aiava missing a number of opportunities early, it was the Queenslander who kept her head and struck when it mattered most, pocketing the first set and then opening up a solid lead in the second.

However, with an opportunity to serve it out, Cabrera faltered slightly, allowing Aiava back into the match as she broke back easily to level proceedings.

“I started to think ahead a little bit instead of staying in the moment,” Cabrera reflected. “But Destanee played very well and put me on the back foot.

“I knew at the start of the third that I had to be really calm, just go out there and not worry about the score, just play. It was important that I didn’t panic. I just backed myself and trusted my game. I knew it was all there.”

Now heading back to her hometown for the next Pro Tour event in Brisbane, Cabrera is keeping her feet fixed firmly on the ground.

“I will enjoy the win but I’m also looking at the next five weeks,” she said. “I’m not done yet and I really want to keep going and keep doing well.”

The Tweed Coast Tennis International is sponsored by Destination Tweed.