Checking in with … Casey Dellacqua

Injured Aussie star Casey Dellacqua sat down with tennis.com.au to discuss her concussion, the physical and mental trauma she went through, and her steps toward a comeback. 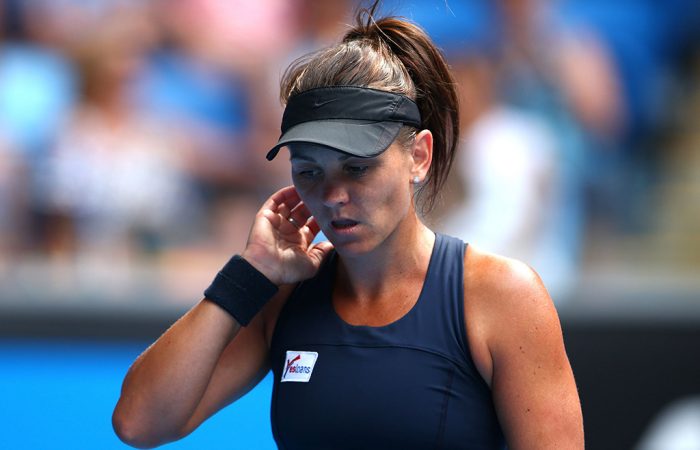 In October last year, Casey Dellacqua was partnering Yaroslava Shvedova and playing Taiwan’s Chan sisters Yung-Jan and Hao-Ching in the semifinals of the China Open. Down match point, Dellacqua was moving backwards while trying to make a shot, yet lost her balance and didn’t have time to put her hands out to break her fall.

She hit her head on the cement, and has barely played since.

At the time, the West Australian was at a career-high doubles ranking of No.5 and was soon to contest her first ever WTA Finals, an elite event open only to the top eight performing singles players and doubles teams of the season.

Having had to overcome the disappointment of missing that event – and many others – plus the anxiety and frustration that stemmed from her slower-than-expected recovery, Dellacqua is finally healthy again.

She chatted to tennis.com.au about her experience, as well as what lies ahead.

What exactly happened in Beijing 2015?

“I haven’t spoken a lot about it. I had a pretty heavy fall in October last year in Beijing, right before I was supposed to go to the WTA Finals with my doubles partner Slava. So obviously it came at a pretty bad time. I was pretty beaten up. I went to hospital in Beijing for a night before I could fly home. At the time I thought a couple of weeks, I’ll be fine, I’ll be sweet, because I had the championships coming up. But as the weeks went on, my symptoms got worse and worse. I was in such a fog for two weeks. I had headaches, I couldn’t go on my phone or watch TV, I was so sensitive to light. And I was just sleeping for ages. And then I went to having almost insomnia where I couldn’t sleep. I had some pretty bad whiplash as well, from flinging my head back before I hit the ground. So it was just a combination of a lot of things. It was pretty scary at the time, because obviously with brain injuries I’d never experienced that and it’s a very bizarre tennis injury. I was doing SCAT tests – a common concussion test for athletes – and I just probably wasn’t improving as such.”

Could you talk us through how the following year has panned out for you?

“Obviously I had to make the decision to pull out of the WTA Finals. And then as the weeks went on, I just felt like I wasn’t prepared for the Australian summer. So I had to pull out of that. But then I started to feel better and I came down to Melbourne to do a bit of training. I went to Fed Cup in Slovakia – hadn’t played a match for ages. I teamed up with Sam (Stosur) in doubles and we won … which for not having played for months I was pretty stoked. But still didn’t feel quite myself in some ways. But I went over to play Indian Wells and Miami and thought I have to get back out there … I kind of forced myself to get going a bit because I just feel like in tennis, the longer you have out you’re going to be left behind. I had so many big events coming up – French, Wimbledon, Olympics – so in my head I just wanted to get back and I was so excited. I think it’s just normal to want to be there. But over time I’ve realised there’s no point being there if you’re not physically and mentally 100 per cent because you’re never going to play your best. I did some more SCAT tests in Indian Wells and things just weren’t where they were supposed to be. I still had lingering effects from the concussion – probably some that I wasn’t aware of. So I made the decision to really take my time to get it right. I’m obviously lucky being in a sport that it’s rare it will happen again – you don’t get multiple concussions in tennis. So that’s where I’m kind of at.”

How did the injury affect you mentally?

“It was pretty freaky, to be honest. It affected me a lot more at the time than I thought it was going to. I’ve had moments where I’ve felt really angry about what happened. Because I would say I was kind of at the peak of my career – the last two or three years I’ve been playing really good tennis and been at some really good rankings. So I’ve been going through a whole lot of different emotions. I know that there’s different stages that you go through, say during a break-up and all those things, stages of grief. I think it was maybe a little bit of that, in the sense that I was first like “has this really happened to me?” I think if I was just any other person I wouldn’t stress. But I had so many big things (coming up) and I had big decisions to make and I felt like I was letting my partner down by pulling out of the WTA Finals. There was so much emotion involved with making big decisions. Then I realised “oh my gosh this has happened” and then I was really sad. And then I was like “gosh, why did that happen to me then when things were (going) really good?” I think there’s been a bit of anxiety that’s come along with having the concussion, just in terms of what I’ve gone through. I haven’t spoken about it a lot, and I guess a lot of people might not get maybe the things that I’ve gone through. It’s been quite a hard slog over the last few months, just to feel myself again and not really understanding concussion. I just didn’t know it was going to affect me as much as it did. I did have a heavy fall, and it was not fun.”

“The physical symptoms have pretty much gone now. No more headaches, my neck’s improved, I’m feeling physically great … I think a lot of it now is mental, just making sure that I’m mentally ready – so much of tennis is mental. It’s not that I’ve got a fear of falling again – it’s just knowing that when I go back out there I’m ready to compete at the highest level. I’m in a good place now where I’ve just accepted what happened. I’ve taken protected ranking so my doubles protected ranking is about No.6 and singles is up there. I can use that when I want to get back. But it won’t be before November this year. So my year is pretty much done. It’s going to be almost a full year (without tennis). I’ve missed a lot. It’s a bit of a shame. I have worked with a sports psychologist throughout this whole thing, just to get to a point where you just accept what happens to you. I’m not going to sit here and feel sorry for myself; I’m realistic in a sense that I’m very lucky with my life and what I have. I’m very grateful, and people are always going through a lot worse. Cards are aways dealt and things happen for a reason – I know it’s so clichéd. But it is what it is and I’m here now and I’m healthy and I’m good and that’s all that matters, really.”

What will you do between now and November? And do you think you can get back to where you were?

“It’s just a matter of from this point keeping in a good space. Outside of doing a little bit of daily training here and there I’m just enjoying being a mum and enjoying being at home. I’ll look later in the year at putting a schedule together. But at this point, I’m just chipping away at a bit of training and that’s about it really. And trying to find things that excite me outside tennis as well, because that’s important. I do have the confidence (that I can get back to my former heights). Because I have the confidence in myself as a doubles player that I’ve had so much success from early on to when the concussion happened that I hope it won’t take me long to get back to that position. Singles will be pretty tough for me, to be honest. I’m not entirely sure where my singles is headed. But doubles is certainly something that’s still on my radar … I can do well if all goes to plan.”