From Barcelona to Athens

With the Rio Paralympics in full swing, former world champion wheelchair tennis player, David Hall – who competed in four Paralympics – takes us inside the journey of a Para-athlete. 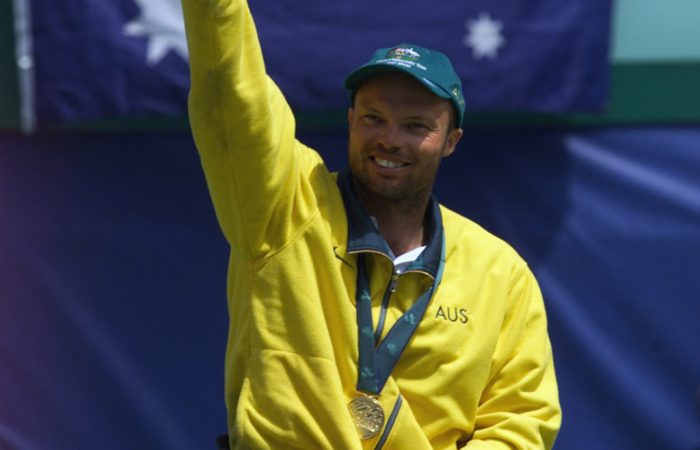 So, what’s it like attending a Paralympics as an athlete? Just like the Olympics, many factors determine if it’s a memory that just keeps on giving years later, or a train wreck from virtually day one that you’d rather forget. The level of expectation, dealing with pressure, team dynamics, the host city and how well the Games are organised all play a role.

Experiences can vary wildly and what might be one athlete’s dream fortnight could be another’s worst nightmare. Just ask Michael Johnson, the great American track-and-field runner who was the favourite to win the 200m gold medal in Barcelona only to contract food poisoning at a local restaurant and not even make the final. Four years later in Atlanta, he would win gold in the 200m and 400m – sweet redemption indeed.

I was blessed enough to attend four Paralympics as a wheelchair tennis player. Vibrant Barcelona in 1992, situated on the Mediterranean Coast; sweltering Atlanta in 1996; Sydney in 2000, with its hometown buzz; historic Athens in 2004.

To represent your country really is a wonderful feeling. In 1992 I was 22 years old and probably didn’t appreciate it fully. I had only been on the wheelchair tennis tour for two years; I’d had some good results but you could still class me as a rookie. I was instead what you might call a ‘dangerous floater’ in the draw. The athlete’s village was virtually across the road from the gorgeous Mediterranean ocean and the Games’ organisers had built wooden paths in the sand for wheelchair users to access the water, which was a nice touch. I’d spent the first day in the village though looking for my lost luggage; I found my bags but lost the whole day. Not a great start.

When the draw came out I was scheduled to play the American Brad Parks, a legend of wheelchair tennis. It was a tough first-round draw for me, and for him. I skipped the Opening Ceremony, as I had to play the following day. Clay was never my best surface; I never liked the unpredictability of the bounces. On this day Brad was all over me and I went down in flames, 6-3 6-1. A day later I lost in doubles as well. And that was it – just as the Games began, I was out. I spent the next week and a half either on the beach or downtown at the bars partying with the Swedes. I heard for the medal matches the stands were almost full – I would have loved to be on court for that.

Four years on, a lot had changed. I was world No.1 and a hot favourite for the gold medal. Then a month before the Games began I partially tore a biceps tendon, which almost completely derailed my Paralympic campaign. After extensive rehab in Colorado I was lucky to even be there, but arriving at the Athletes’ Village was a shock. Nothing had been cleaned from the Olympics a month earlier – mattresses were turned upside down, the lines for meals were outrageous and bus drivers were getting lost on the way to venues. The tennis event was at Stone Mountain, an hour’s drive from the village, and it was hot. Damn hot. These games weren’t promoted either, which meant competing in barely quarter-full stadiums. As an athlete it was disappointing but I didn’t care that much. I only wanted one thing, a gold medal.

After a few days the bus drivers figured out where to go, the lunch lines got shorter and the rooms were cleaned. I remember in the village the Israelis had their own fenced-off section for security. I went to the Opening Ceremony this time – the only thing I remember from it was waiting in the tunnel for hours literally praying for our team to enter the stadium. The uniforms we wore made us look like Cuban tobacco traders, with blue-coloured shirts and white boater hats.

As the tennis event started my bicep held up and I was winning matches. I felt a lot more ‘into’ these Games than Barcelona with the rhythm of practicing, playing matches and then heading back to the village. There were no days at the beach or beers with blondes – it was a regimented schedule.

I made it to the semifinals and on a scorcher of a day before a smattering of spectators I lost a heartbreaker, 7-5 in the third to the big-hitting Dutchman Ricky Molier, who went on to win gold. I did recover enough to win the bronze medal and also a silver in doubles in a thunderstorm-interrupted match. Atlanta was bittersweet and a totally different experience than Barcelona, on so many levels. But I still didn’t have that cherished gold medal.

In 1993 Juan Antonio Samaranch announced “the winner is Sydney” and the Olympics and Paralympics were headed to the Harbour City. My brain went into a mini meltdown. My thought: “I have a chance to win gold at home.” A rare thought for most athletes around the world. Sydney was a big build-up for me – I was again world No.1 leading into a Paralympics. There were events and media and Australia Post even put me on a stamp. The expectation was enormous. I was the first torchbearer of the Paralympic Flame and received the torch from Prime Minister Howard in front of Parliament House. Even before these Games began, they were light years away from Barcelona and Atlanta.

There was no way I missing this Opening Ceremony. And this one I remember very well. One hundred thousand spectators crammed into the Olympic Stadium and greeted us as we entered. For my first-round match against a Swede the stadium was almost full; it was electric. Lessons were learned from Atlanta and the same organising Committee that was used for the Sydney Olympics was also employed for the Paralympics, which meant it was smooth running. The village was an actual treat but I do remember I needed a couple of nights at home midway through the event, just to take the edge off.

This time I made it to the gold-medal match and in a packed stadium won in a three-set thriller. I finally had the medal I wanted the most, at home. I also nabbed silver in doubles. This was the Games to end all Games.

The birthplace of the Olympics. I knew deep down this would be my last Games; my body and my mind just didn’t have enough for four more years. As was the case at the previous two Games, I came in as world No.1. I remember arriving in Athens and travelling to the village by bus and being surprised at actually how third-world everything looked, such as the buildings, roads and footpaths. We’d heard rumours coming in that venues still had problems even though the Olympics had come and gone. As we moved into the village a pack of wild dogs was seen – I thought these Games could be the train wreck that Atlanta in ‘96 was.

I couldn’t have been more wrong. The Greek people were so lovely. About halfway through the Games I moved into a hotel downtown and developed a friendship with the local coffee guy who asked me about my matches every day. I rode a rickety elevator up to the Acropolis and at the tennis venue they served grilled chicken that was the best thing you’ve ever tasted. I really wanted to win back-to-back gold medals but as it turned out Robin Ammerlaan of Holland shellacked me in the final and I had to settle for silver. I also got a bronze in doubles.

My experience of four Paralympic Games was a mixture of the good, the bad and the ugly. The funny thing is I wouldn’t change a thing, for it shaped me for what was to come.

The Australian athletes these next two weeks in Rio will get their own memories to last them a lifetime, Just keep a lookout for missing luggage, lost bus drivers, stray dogs and, hopefully, a golden moment or two.