Despite a heavy loss in the opening round of the US Open, Ellen Perez found her first Grand Slam main draw experience a highly educational one. 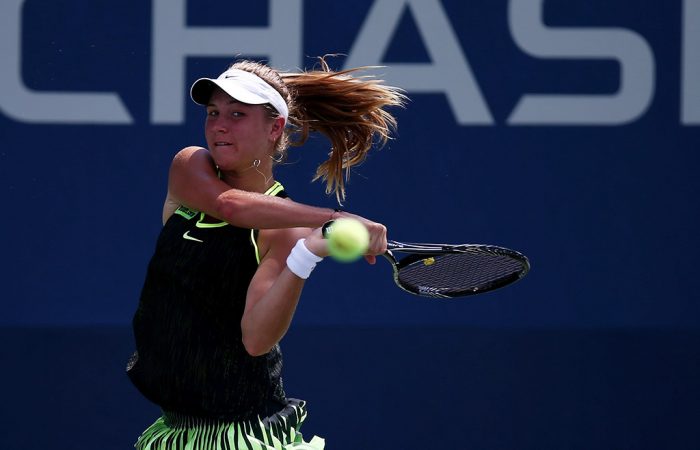 Australian sports management student Ellen Perez will turn down more than $50,000 in US Open prize money to remain in college in America.

But the 20-year-old said she thoroughly enjoyed the experience despite the belting.

“It was pretty exciting to be out there,” Perez said.

“It definitely didn’t go as planned, or as hoped, but it was great to be able to have my Grand Slam debut and get out on court in front of all the fans and what-not.

Not nice enough, though, for Perez to give up her scholarship at the University of Georgia for a pro career just yet.

“If I choose to definitely stay at college, I have to only take my expenses, so I’ll be leaving a good 40k behind,” she said.

The pay cheque for first-round losers is actually a record $US43,300 ($A57,200), but Perez said it was a small sacrifice for an education.

The world No.723 – who beat Naiktha Bains, Arina Rodionova and Ash Barty in successive matches to make the main draw at Flushing Meadows – is two years into her four-year degree.

“They put in a lot of money for our education,” said the emerging South Coast star from Shellharbour.

“I think our scholarships are worth almost two hundred thousand (dollars) a year.

“The college has given me a lot, so losing 40 grand isn’t too big of a problem.”

Perez was anything but discouraged by her 50-minute thrashing, saying she’d received a priceless lesson in the intensity of life as a Grand Slam performer.

“I definitely need to play at that level more often,” she said.

“I haven’t been able to experience that high level of tennis before.

“My highest level is probably a 50k main draw so it definitely is a big step up and I definitely felt the pressure of her and I know I’ve got a lot of things I need to improve.

“Definitely a learning experience. Even being able to train with good players here, I learnt a few things and I hope the next time I get the opportunity that I can step up and hang with them a little better.”