Duckworth out to make up for lost time

After an injury-plagued year, James Duckworth is feeling good about his game and hoping to get back on track at the US Open. 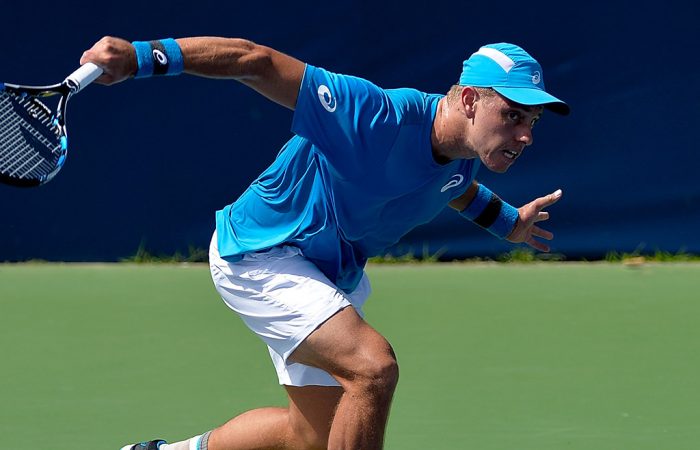 New York: the land of opportunity and where James Duckworth hopes to start all over again.

A year after cracking the world’s top 100 for the first time, Duckworth is back at Flushing Meadows as a US Open wildcard trying to rebuild his career and ranking following a season of frustration and misfortune.

If tearing a flexor tendon in his right elbow after the Australian Open wasn’t bad enough, the luckless Sydneysider then broke his left wrist doing sprints.

The twin blows wiped Duckworth out for four months and sent the 24-year-old spiralling out of the top 200.

“It wasn’t ideal. But right now I’m healthy and I’m really looking forward to playing on Monday,” Duckworth told AAP ahead of his first-round tussle with Dutchman Robin Haase on Tuesday (AEST).

Despite his setbacks, Duckworth has good reason to feel upbeat after drawing the world No.64 in the opening round.

“I could have played a seed, which wouldn’t have been as good,” Duckworth said.

“He’s been around the tour for a long time. He’s got a good serve, a good forehand.

“I’m going to have to try and play aggressive and look to take those two shots of his out of the equation.”

Duckworth arrived at the season’s final Grand Slam with his game in good order.

“I’ve been playing well,” he said. “I’ve been pretty unfortunate in my results. I’ve basically lost tiebreakers in the last six weeks.”

When he wasn’t losing in third-set breakers, Duckworth won three matches to qualify for the Atlanta Open – and then drew top-seeded defending champion John Isner first round.

“I’ve been playing some good tennis and I think I’m just around the corner from a good performance,” he said.

“I’d like to build on the good performances that I’ve put in the last couple of months, try and get some more wins and build that ranking up a bit.”

Fellow Sydneysider Jordan Thompson is the only other Australian playing on Day 1.

Thompson, the world No.92, has a winnable match against the 108th-ranked qualifier Steve Darcis in his US Open debut.

“While I haven’t won as many matches as I would win in a Challenger event, I think that lifts my game anyway.”