Tanderrum Bridge has been announced as the name for the new footbrigde to link Melbourne Park with Birrarung Marr and Flinders Street Station. 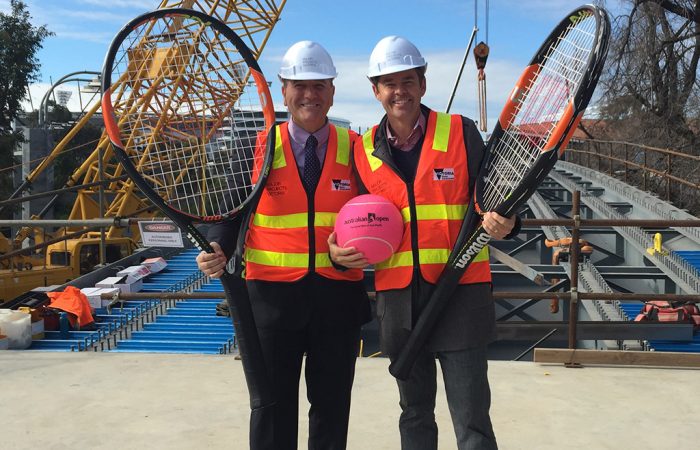 Melbourne’s state-of-the-art new pedestrian footbridge linking the city and Melbourne Park – the new gateway to the Australian Open – will be named Tanderrum Bridge.

Australian tennis legend Todd Woodbridge and Minister for Sport John Eren today joined the winners of the ‘Name The Bridge’ competition, whose entry emerged from thousands of online suggestions, for the official announcement.

The footbridge is the centrepiece of the $338 million Stage Two upgrade of Melbourne Park. It will shave pedestrian travel time between Flinders Street Station and Birrarung Marr to under 10 minutes.

The bridge will provide a safe route for fans to enter and exit the precinct, ensuring spectators don’t have to cross Batman Avenue at ground level.

Tanderrum is a welcoming ceremony by the people of the Kulin nations, featuring song, dance and cultural exchange, and providing safe passage for visitors.

Tanderrum Bridge will provide passage for thousands of Victorians and visitors to the Melbourne Park precinct, formerly a ceremonial gathering place for the people of the Kulin Nations.

The name is the perfect fit for a bridge connecting a world-renowned sports and entertainment precinct that hosts more than 200 blockbuster events each year, including the Australian Open and the world’s biggest music acts.

“The Australian Open is all about people coming together to celebrate world class tennis, and we’re excited to welcome hundreds of thousands of fans to Melbourne Park via this brand new gateway to the event this summer,” Woodbridge said.

Minister Eren said: “We’re making history in Melbourne today. Tanderrum is the perfect title for a bridge that will accommodate thousands of pedestrians each year.

“Victorians are proud of our heritage and our history. What better way to acknowledge the profound contribution Aboriginal Victorians have made to our state.

“Melbourne Park is a state-of-the-art venue that attracts the biggest acts and sporting events from all over the world, and we’re enhancing it. It will secure our status as the events capital and create thousands of jobs.”