One of Australia's brightest junior prospects, Alex De Minaur has moved through to the quarterfinals of the boys' singles at Wimbledon without dropping a set. 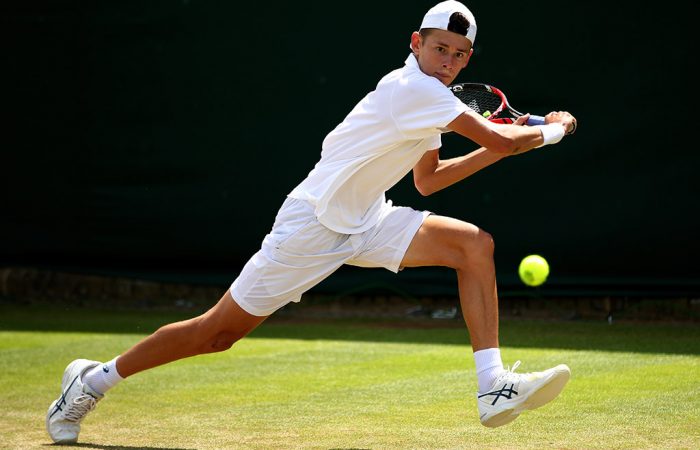 He may have been raised on clay and enjoyed his breakthrough performance on hard court, but Australia’s Alex De Minaur believes grass is where he best fortunes may lie.

The seventh seed in the boys’ singles at Wimbledon sealed a quarterfinal berth on Wednesday at the All England Club, after beating Germany’s Daniel Altmaier 7-6(5) 6-4.

Due to face highly-rated Canadian third seed Felix Auger-Aliassime – who came within a whisker of winning the junior title at Roland Garros – in the last eight, De Minaur said he hoped to extend his time in London this week with another victory.

“I’m pretty happy with the way I’m playing throughout Wimbledon,” he said.

“I’ve had three tough matches, it’s been good to get through not dropping a set. I did go down a set point a couple of matches but it was good to get over the line.

“(Wimbledon’s) obviously got that prestige … I’m really happy to be in quarterfinals. Really don’t want it to end, so hopefully can keep going.”

The New South Welshman, 17, spent large portions of his childhood growing up in Spain – where he currently resides – honing his crafty yet aggressive game on clay.

And in 2015, he came to prominence with a run to the semifinals of the US Open boys’ singles event on the quick hard courts of Flushing Meadows.

He repeated the feat on the Plexicushion at Melbourne Park when he advanced to the last four at the Australian Open juniors six months ago.

De Minaur has shown a predilection for grass, too; prior to Wimbledon he advanced to the semifinals of the junior tune-up event in Roehampton.

He has won seven of his last eight grasscourt matches.

“I’m just really happy to be on the grass, my favourite surface and I look forward to this tournament every year,” he said.

“I think it (my preference for grass) comes with the way I play, the aggressive mindset I’ve got. Ever since I first touched the grass I knew this was going to be my favourite surface.”

Having played predominantly on the ITF circuit outside of the junior Grand Slams, De Minaur believes the experience he’s accrued against older and more seasoned opponents has benefitted his game for moments such as these at Wimbledon.

“The level has always been there; it’s been a little bit of a mental battle to believe that I’m good enough to be where I am. Every result I get helps me develop a little more confidence and be able to put that towards each match,” he explained.