In a thrilling battle between two of the game's brightest shot-makers, Aussie Nick Kyrgios saw off the challenge of Dustin Brown to reach round three at Wimbledon. 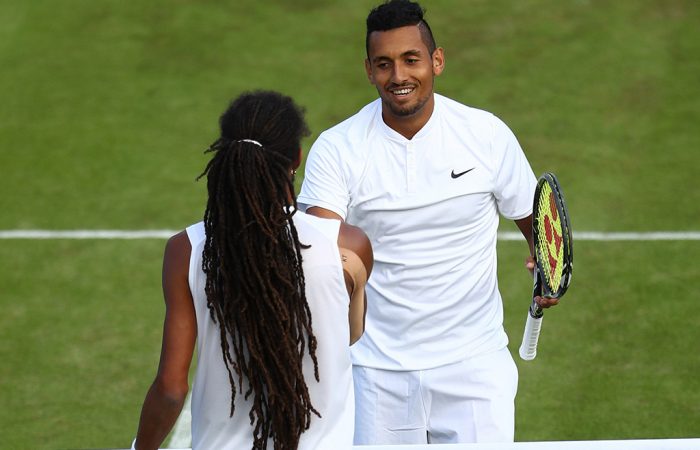 Nick Kyrgios has survived a huge scare to reach the Wimbledon third round with a dramatic five-set victory over German giantkiller Dustin Brown.

Australia’s 15th seed had to deal with a proven grasscourt specialist who took out Rafael Nadal last year and Lleyton Hewitt in 2013.

And the match erupted at the start of the third set when Kyrgios saw red after American umpire Jake Garner ruled a double-bounce against him.

Replays appeared to confirm Kyrgios had in fact Kyrgios reached the ball in time after lunging forward to scoop up a Brown drop volley on the very first point of the third set.

Kyrgios lost focus and immediately dropped serve the next game to fall behind 2-0.

But he received support from his opponent, who lashed the umpire for not only the double-hop blunder but for calling a let on a serve the German deemed to have cleared the net by a foot.

Brown kept his nerve to convert his early service break into a two-sets-to-one lead.

Kyrgios did well not to mentally unravel and seized a decisive break in the third game of the fourth set to force a fifth just one hour and 39 minutes into the match.

Kyrgios had Brown down break point serving at 3-3 in the fifth set when more rain forced the players off for another 90 minutes.

The Australian made no mistake closing out the contest to book a third-round date on Saturday with either Spanish No.22 seed Feliciano Lopez or Italian Fabio Fognini.

It was a high-quality encounter between two of the finest shot-makers in tennis, with Kyrgios finishing with 27 aces and 55 winners.