The Aussie trio of Bernard Tomic, Nick Kyrgios and John Millman will all feature on Saturday's program - with Millman making a Centre Court debut. 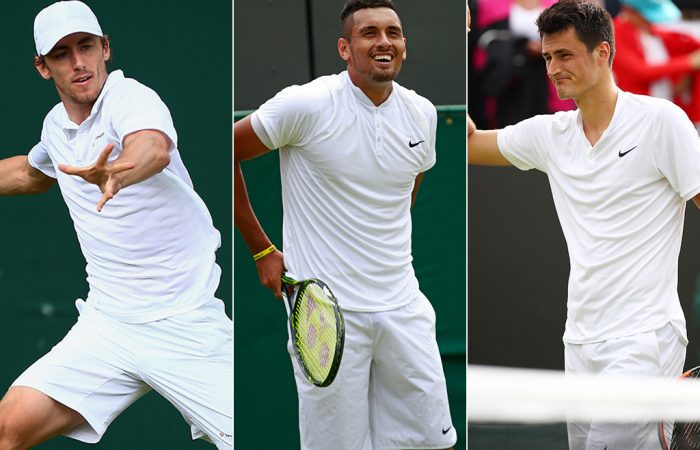 A rejuvenated Bernard Tomic is settling in for the long haul as he prepares to slog it out with Roberto Bautista-Agut for a place in the last 16 at Wimbledon on Saturday.

John Millman, a year after getting lost on the way to his Wimbledon debut, is cherishing his inspired journey to a showcourt showdown with second seed Andy Murray.

And Nick Kyrgios will return to court for the second day running when he meets dangerous left-handed Spaniard Feliciano Lopez, the 22nd-seeded three-time Wimbledon quarterfinalist.

Tomic admitted he desperately needed Friday off after toiling for almost six hours to reach the third round.

Bautista-Agut, by contrast, only played three sets against Australian Jordan Thompson in his opener and received a walkover in the second round against Mikhail Kukushkin.

Tomic is hoping the 14th seed may be a little underdone. “He hasn’t played that much tennis and I have played a lot of tennis. It will be interesting,” Tomic said.

But the Spaniard showed his class by taking the opening set against world No.1 Djokovic at the French Open and Tomic knows he’s in for a battle.

“He’s going to run for every ball. This is why he’s almost a top-10 player,” the Australian said.

“So I have to look at this match and go for it. Because if I do that, I should come out on top. But it’s going to be very, very tough.”

Meanwhile, Millman has won the hearts of the British press – and hopes to do the same with the public, even if it comes at the expense of the local hero.

The humble star admits Saturday’s clash with Murray will tick off a number of career firsts.

Not only is it his first time in the third round at the All England Club, it will also be the first time he’s set foot inside Centre Court or No.1 Court.

It’s why, after contemplating retirement due to shocking shoulder injuries that temporarily forced the Queenslander out of the game and into an office job, Millman won’t be taking anything for granted as he attempts to force his way into a maiden fourth-round Grand Slam appearance.

“I feel as if I deserve to be there. I have played two good matches to get through.

“And third round Wimbledon, it’s uncharted territory for me. But how good is it? You know, this is what you live for.

“I know that tennis can change pretty quickly and I know you’re one big injury away from being back at university.

“I plan to go out there and I plan to make the most of it, and I plan to put up a great showing. I hope that I can deliver and I hope that maybe I might even turn a few of the crowd (and) they will go for me a tiny bit.”

The world No.67 insists he won’t be intimidated by the two-time grand slam champion, who won Wimbledon in 2013.

“I have never been one to necessarily go out with an intimidated mindset before I play,” Millman said.

“That’s kind of being disrespectful to the game.

“So we are going to start at love-all. I’m going to give it everything.”

> TV Guide: find out where and when you can follow the action