Lisicki overwhelms Stosur in second round

Lisicki's power off the ground and serving prowess proved too much for Sam Stosur to handle, while Daria Gavrilova was shown the door by the in-form Dominika Cibulkova. 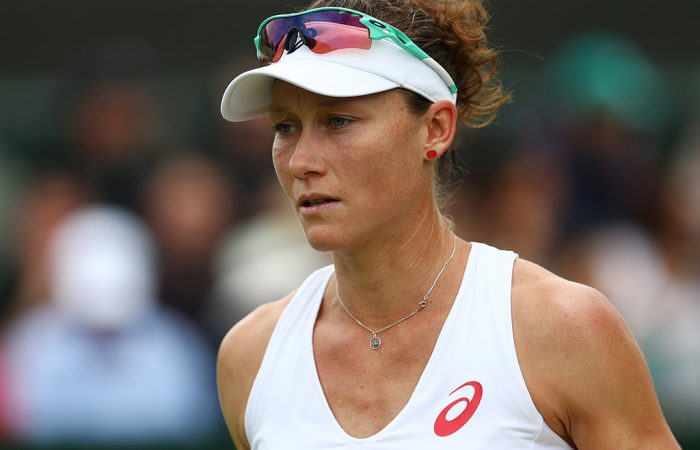 Sam Stosur’s Wimbledon struggles have continued with another early exit from the grasscourt Grand Slam.

Yet there did not appear to be a lot she could have done to prevent such an outcome this time around.

Stosur fell victim to the awesome power and precision of 2013 runner-up Sabine Lisicki on Thursday to fall to a 6-4 6-2 second-round defeat.

“Overall I thought she played very well. You kind of know that Sabine is capable of playing like that, so you’ve gotta really take any opportunities you get,” Stosur said.

“I think unfortunately going down that break early kind of maybe let her loosen the shoulders a little bit. Really relax into that. If you can keep it on serve, maybe then you do see some cracks form.

“But apart from my second serve, I thought I actually played pretty decent, and she played very, very well.”

Australia’s former US Open champion has now only managed to venture beyond round two three times in 14 visits to the All England Club.

Having lost to Lisicki during the German’s charge to the final three years ago, Stosur was prepared for what was coming – but proved powerless to stop her once again.

A three-time semifinalist in addition to her runner-up showing, Lisicki is a genuine Wimbledon specialist and showed just why as she delivered a grasscourt clinic.

While Stosur was plagued by doubles, Lisicki – owner of the fastest recorded serve in women’s tennis history – was nigh on untouchable on her monster delivery.

The German hammered six aces – among 12 overall – and lost just two of 22 points on serve in the opening set after breaking Stosur in the first game of the match.

Stosur again dropped serve in the opening game of the second set before Lisicki suffered her one and only lapse to allow the Australian to level at 1-1.

The let-off was brief, though, as Lisicki fired down the fastest serve of the championships – a 196kph rocket – and continued to pound winners from all parts of the court to reel off three straight games and take full command.

Lisicki signed off with her 11th and 12th aces in holding to love to close out the contest.

Gavrilova, who won Olympic selection on Thursday, was bounced 6-3 6-2 as the Australian Open 2014 finalist proved too strong to win in 78 minutes.

The 22-year-old Australian held the early advantage after breaking her more fancied rival in the third game – but it was one-way traffic from there.

From 3-1 down, Cibulkova won five straight games to take the first set and steamrolled Gavrilova with two breaks in the second set to close out the match.