Sam Stosur faces the toughest of second-round battles against Sabine Lisicki at Wimbledon, while Bernard Tomic and Matt Barton will resume their first-round matches. 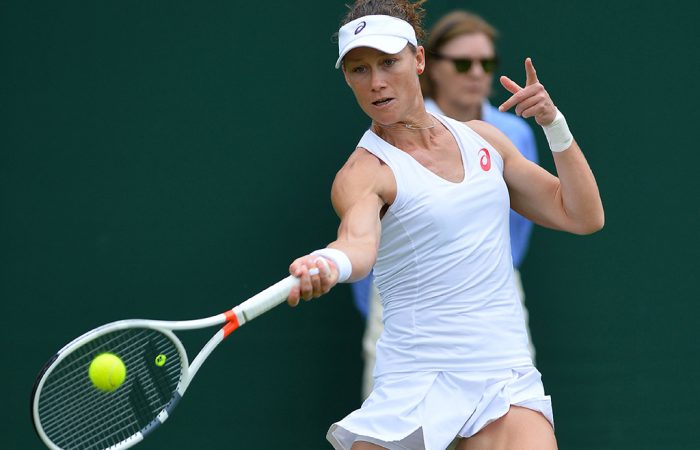 Sam Stosur is pledging to “fight fire with fire” when her Wimbledon hopes go on the line against explosive German Sabine Lisicki on Wednesday.

Stosur is bracing for a torrid encounter against the former finalist and owner of the fastest record serve in women’s tennis history.

Lisicki surged past Stosur en route to the 2013 title match at the All England Club and also made the semifinals in 2011 and the quarters on three other occasions.

The grasscourt specialist has dipped to 81st in the rankings after only once managing to string two wins together in a miserable 2016 season punctuated by her bitter break-up with her comedian boyfriend.

But having also partnered Lisicki to the 2011 Wimbledon doubles final, Stosur knows full well what is coming her way.

“No doubt this is a tournament she feels very comfortable at no matter what she’s been doing in the lead-up,” said Australia’s 14th seed after a trouble-free 7-5 6-3 first-round win over Magda Linette.

“I’m sure when she walks through the gates here she probably feels like she’s No.1 in the world.

“You have to be aware of that and know she has a very big serve, she plays big and hits the ball hard.

“She absolutely plays aggressive. If she’s on that day, you have got to be really willing to fight fire with fire and go after it and not kind of feel like you’re going to get dictated to.”

Despite her forgettable season to date, Lisicki looked ominous in dispatching rising American Shelby Rogers 6-1 6-3 in less than an hour in her opener.

“I really liked this place from the beginning. In this place you feel the history. It’s just a magical place,” Lisicki said.

“When I come here, I just feel really special to have the opportunity to play.”

Apart from firing down a 210kph rocket in Stanford in 2014, Lisicki last year crunched a world-record 27 aces in a grasscourt match in Birmingham and knows her showdown with Stosur will likely be decided on her racquet.

“When you serve well on this surface, it’s a big advantage, yeah,” said the 26-year-old.

Stosur is feeling revitalised after her charge to the French Open semifinals this month, but knows she must step up to reach the third round for only the fourth time in 14 visits to the All England Club.

“Because against someone like her with a game like she’s got, it’s very easy to feel under the pump and under pressure all the time if she’s playing well,” Stosur said.

“You have to be aware of that and balance out the patience and consistency with your own aggression.”