Daria Gavrilova gritted out an impressive three-set win to claim her first victory at Wimbledon and a second-round meeting with Dominika Cibulkova. 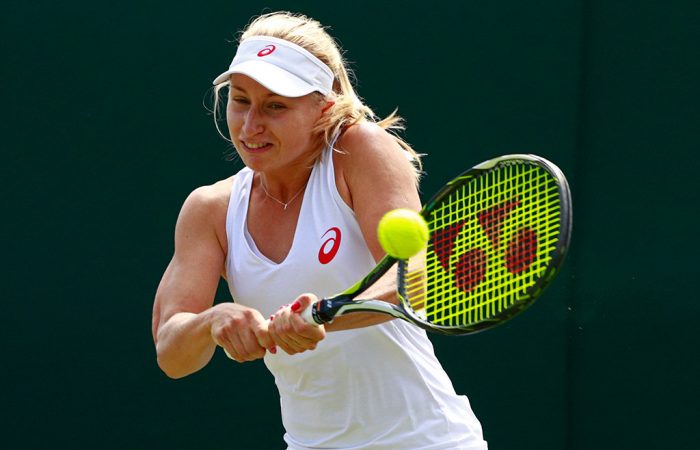 Dubbed ‘the female Lleyton Hewitt’ during her dream Australian Open run this year, Daria Gavrilova has promised to ramp up the aggression for her Wimbledon second-round showdown with Dominika Cibulkova.

Gavrilova drew on her fighting qualities – and regularly roared Hewitt’s trademark “come on” rallying cry – in a gutsy 2-6 6-3 6-4 comeback win over China’s Wang Qiang on Tuesday.

Having lost the first set, Gavrilova was broken in the opening game in the second and things could easily have unravelled as she offered harsh words of self-criticism – within earshot of boyfriend Luke Saville who was playing on a neighbouring court.

But the rev-up had the desired effect, and Gavrilova won three games on the trot as her powerful forehand found its rhythm – leaving her with 13 winners to Wang’s nine by the end.

From there she stepped up a gear and produced some exceptional defensive tennis to march into the second round as her demeanour switched from angry to ecstatic.

“I had chances on her serve almost every game so I (said to myself) ‘ok, you’re a break down but you’ve just got to fight’,” Gavrilova said of the stuttering start to the second set.

“And that’s what I did. I started getting a bit more fired up and it helped.”

It was an impressive victory, despite Gavrilova boasting a superior ranking, but the Russian-born starlet knows an even-more dangerous opponent awaits her on Thursday.

Cibulkova cruised into the second round with a straight-forward 7-5 6-3 win over Croatia’s Mirjana Lucic-Baroni, and the one-time Wimbledon quarterfinalist – who won in Eastbourne last week – is a considerable road block in Gavrilova’s path to the third round.

But Gavrilova feels the key to victory could come from her Hewitt-esque qualities – fire and aggression.

“I definitely need to be a bit more aggressive,” she said, before giving a nod to the occasionally volatile two-time Grand Slam champion.

“I was compared to him a few times – that I’m the female Lleyton Hewitt. I think I started saying (“come on”) a bit more in the second and third sets.”