Sam Stosur's new coach Andrew Roberts says the Australian is among the most professional players he's every worked with and believes she can do some damage at Wimbledon. 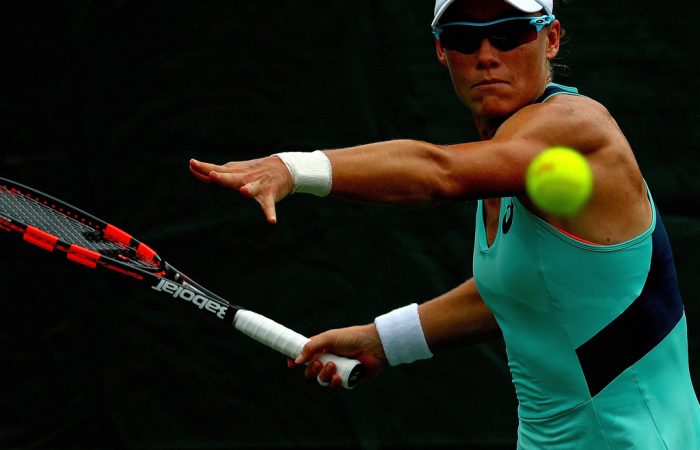 Sam Stosur’s new coach Andrew Roberts will focus on getting his charge to believe in deploying her weapons on grass as she embarks on her 14th campaign at Wimbledon.

Stosur, who has begun working with Roberts in the past couple of weeks after splitting with long-time coach David Taylor following Roland Garros, has yet to advance beyond the third round at the All England Club.

She opens her 2016 tournament on Monday against Poland’s Magda Linette.

“My approach is working on the weapons that Sam’s developed with the help of Dave over the last seven or eight years that have helped her succeed at the highest level. Just trying to take those weapons and applying them to grass courts,” he said at Wimbledon on Sunday.

“Sam’s quite unique with her weapons in the women’s game, they’re quite different, and that’s what makes her so special. And once you get on the grass it’s a little bit different so making sure that those weapons are just as prevalent on the grass as they are on hard and clay courts, where she’s had her best success.

“There’s going to be some things that Sam’s uncomfortable with on the grass and she just needs to accept it, and trust that it’s the right way she needs to approach it and go for it and believe in herself. I think you just take it one match at a time, and as the tournament goes on, you do develop that trust in your game on this surface.

“She’s definitely trying to work on a few things. A few things have been working really well over the last week. The question is whether she’s able to do it in the pressure situation of a match.”

Roberts and Stosur intially came into contact through Fed Cup, where Roberts has for the past three years worked as a hitting partner for the Australian team.

He also coached her briefly, “under Dave’s guidelines”, following last year’s Wimbledon, a period during which Taylor wasn’t travelling with her. In that time, Stosur won the claycourt title in Bad Gastein.

This time around, Stosur approached Roberts to see if he could work as her primary coach during the grasscourt season. The pair met up in Melbourne after the French Open and spent a few days hitting before flying to Europe to prepare for the Wimbledon swing.

Outside of his work with Stosur and the Fed Cup, Roberts’ primary role is that of head coach at Tennis Australia’s National Academy in Perth.

“I work in development with some of Australia’s up-and-coming juniors. You always have a long-term focus with developing athletes … (But) Sam’s already there. (This new role is) way more specific to the here-and-now, and the next opponent, and that’s probably the biggest difference in what I do on a day-to-day basis,” he explained.

“Sam’s one of the most professional tennis players I’ve ever worked with or had the chance to be around. She ticks all the boxes really in terms of preparation and also in the way she goes about her practice and preparation for matches. You can’t ask anything more of her. As a coach that’s what you want to see – a person who is willing to do everything in their power to be able to play the tennis that will allow them to succeed, and she does that. For me, when your player’s doing that, it’s a pretty easy job.

“I’ve never seen her application to a session ever change … her intensity, it’s always world class. She’s always very early to prepare; in terms of her physicality, she’s always taking care of her body and making sure she’s getting in the best possible shape heading into a tournament. You don’t need to prompt her, she just does it. She listens to her team.

“Everything’s structured days in advance, it’s not on the fly. She’s clear on what practice she’s doing three days in advance. What happens in those sessions is now more up to me, but we chat about that regularly.”

For the past couple of days, Roberts has scoured video footage – supplied by Tennis Australia’s high performance analysis team – to glean background on Linette, a player Stosur said she knew little about.

With a week of productive practice under her belt following her opening-round loss in Eastbourne, Roberts is confident that Stosur can perform well at the All England Club.

“I think we do have a good relationship, which is important in the women’s game … I’m familiar with Sam’s game and watched a lot of her. I think I can hopefully help her keep maximising her weapons. It’s just making sure she keeps finding those weapons consistently.